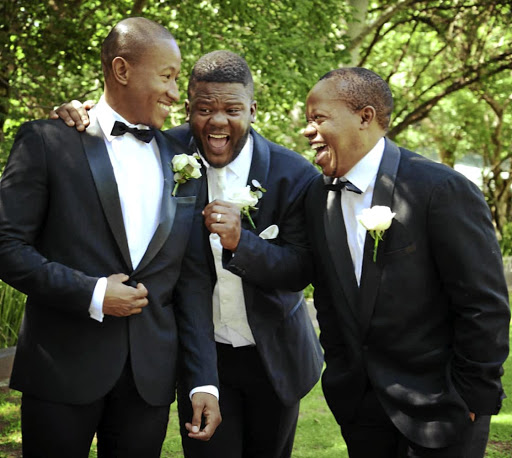 The cast of Isidingo stayed behind after filming their last episode on Friday, reminiscing about the good times.

The actors and crew who had become a family spent the time laughing and joking as they bid goodbye to a show that has been on TV for 21 years.

Isidingo, which made its debut on July 7 1998, was cancelled by the SABC as the national broadcaster's financial woes began to bite in the past year.

The last episode will be flighted on March 12.

As much as it was an emotional moment for everyone who had worked on the production, they tried by all means not to be sad.

One of the popular actors on the soapie, Motlatsi Mafatshe, said: "We hung out until the next morning because I got home around 4am. We told each other stories and had fun.

"It felt like surreal, it was unbelievable. We kept motivating each other to be positive. It felt like we went through a journey where we were studying and now we are done and we have to face the world," he said.

Mafatshe, who played the role of Sechaba, said they were not angry that the show was ending because they understood that all good things come to an end.

He joined Isidingo 10 years ago and rose to become an award-winning actor who later became a director of the show.

In explaining his character Sechaba, he said: "I thought I will die playing that guy [Sechaba]. He is the kind of a guy that we grew up looking up to. He is a young man from the township who proved against all odds that you can achieve anything."

Local cast turns on the heat
Entertainment
2 years ago

He said working for Isidingo taught him a lot, including the importance of preparing for shoots and never to take his work for granted.

"I learnt about storytelling and I grew in that. But mostly I want to thank SABC for giving us the platform to showcase our talent and for dedicating themselves in developing talent."

Jo-Anne Reyneke, who played the role of Lungi Buyela, said one of the things she would miss about Isidingo was the homely environment.

Reyneke, who has been with the show for a year, shot her last show on Wednesday and said it was normal for her.

"I enjoyed being part of Isidingo, a show that touches all from the poor to the rich.

"I loved how we all enjoyed dancing and singing. We did not have a special song but we had fun," Reyneke said.

In a November 29 statement SABC acting group executive: television David Makubyane said: "The decision to decommission Isidingo was informed by a number of factors which includes poor audience ratings during the time slot, decline in revenue and poor return on investment..."