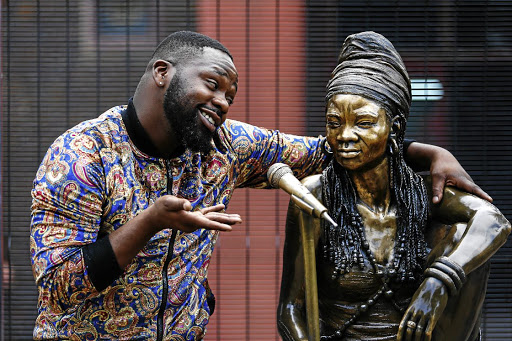 Bongani Fassie is involved in a film about Brenda Fassie.
Image: Moeletsi Mabe

The contested biopic of late icon Brenda Fassie's life is steaming ahead, with producers confident the film will be released in late 2020 or early 2021.

Showbiz Bee announced in January last year that it had partnered with the Brenda Fassie estate and the Legaci Nova Entertainment group to produce a biopic about Brenda's life and her journey to stardom.

However, Brenda's former manager and producer Chicco Twala claimed that he had the rights to any film on the star's life and had not given the companies permission to go ahead with the project.

He was granted a court interdict, stopping the project from going ahead until it was decided who had the rights to make the film.

While the film's producers said they were not interested in meeting with Chicco to iron out their differences, they said the delays were costing them big time.

“The delays are not good for anyone. It's a financial burden to us as well. We have 18 to 32 people working for us between the UK and South Africa. Those people need to be paid but the project is not moving forward. The longer the delays, the more it will hurt financially,” Vaughn Eaton of Legaci Nova Entertainment, who represents the company in South Africa, said.

Contrary to many a racist liberal's belief, colonisation and apartheid did squat for South Africa.
Opinion
1 year ago

A life-size statue depicting the late singer Brenda Fassie will return to the Newtown district of downtown Johannesburg - this time in pride of place ...
Entertainment
2 years ago

Arguments to make the order permanent were heard last September and judgment was reserved.

In March this year, the high court in Pretoria dismissed Chicco's application to permanently stop Brenda's son Bongani from going ahead with the movie.

In her ruling Judge Nomonde Patience Mngqibisa-Thusi said that an agreement Chicco was using to prove his claims was “invalid from the outset”.

Chicco said that he planned to appeal against the ruling, and that the film would be “useless” without the music rights he owned.

“It doesn't affect me, it affects the producers. They need me more than I need them,” he said.

Speaking to SowetanLIVE's sister publication TshisaLIVE in November, Vaughn said the film was going ahead and all involved were looking forward to its release late next year or early 2021.