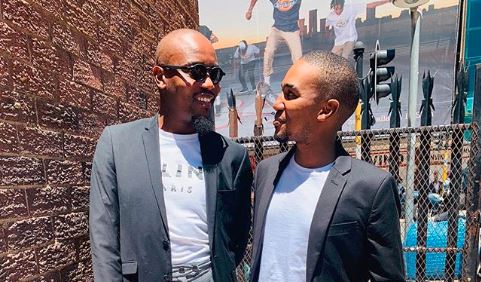 Ever since Moshe Ndiki and Phelo Bala made their romance 'Instagram official' in January, they've been serving #lovegoals.

Rumours that Phelo and Moshe were an item first started doing the rounds late last year, with them confirming the speculation by sharing loved up snaps on social media.

Then in June the couple were rocked by break-up rumours after social media detectives noticed that snaps of the pair had dried up.

The lovebirds moved swiftly to squash the speculation.

Throughout the years we’ve always found our way back to one another and nothing has changed. This is what I want and the love that I truly need.

Phelo and Moshe quickly became one of Mzansi's fave couples, and even bagged the  cutest couple of the year nomination at the Feather Awards.

Phelo and Moshe's moms also scored a nomination in the rainbow parenting category.

At the time Moshe told SowetanLIVE that their moms were an inspiration.

“Our moms deserve to win the most, we will always be a cute couple. What they are doing is really inspiring and I don’t even think they are aware of it, because being a mother, loving and caring comes so natural to them,” Moshe said.

Then as fans were taking in all that inspiration, Phelo whisked Moshe to a romantic spot in Johanesburg in September and popped the question.

“Didn’t even do my nails (not that I do them) but wtf? He proposed,” Moshe captioned a snap of his ring on Instagram.

Now can we roll into 2020 please, because we can't wait for these two to head to the altar!

Somizi, Mohale go all out
Entertainment
2 years ago

Somizi and Mohale's big day is giving everybody all sorts of good vibes as they prep to tie the knot this Saturday, September 28.
Entertainment
2 years ago
Next Article