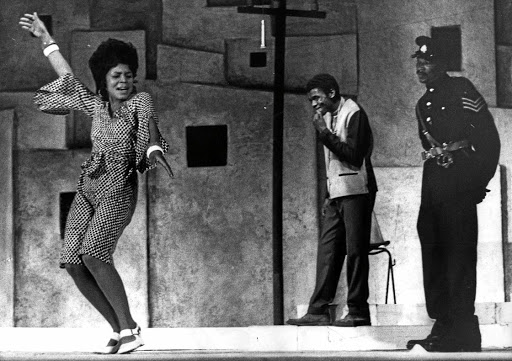 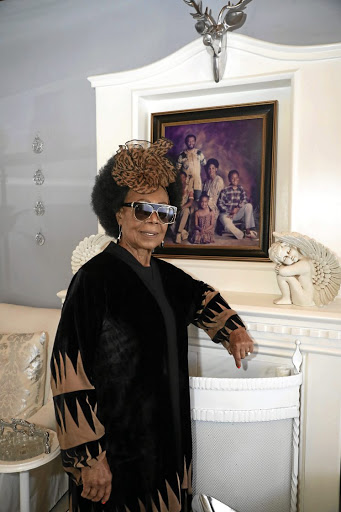 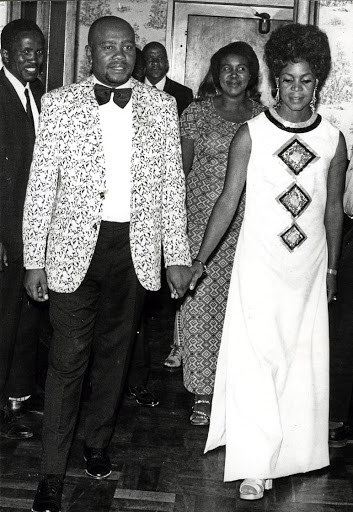 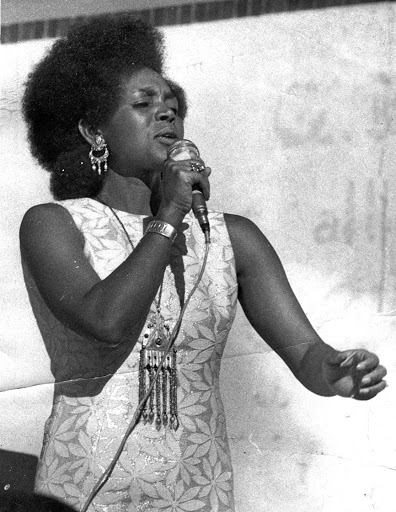 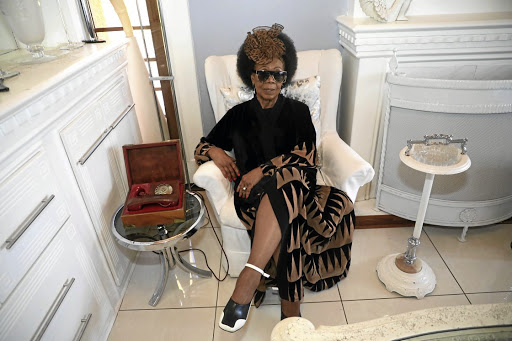 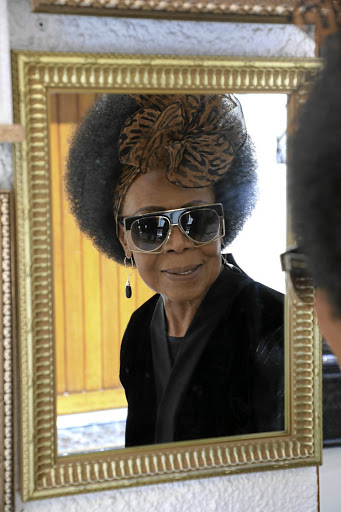 Abigail Kubeka's dazzling beauty, perfect hazelnut skin tone and immaculately groomed character were the cause of harassment by a white teacher who taught her at Kilnerton Institution, a boarding school in Pretoria.

"It was clear that she didn't like black people and did everything in her powers to make me feel uncomfortable in class. She would order me to go out and wash the make-up on my face, even though I had no make-up on. It was the natural beauty of my skin," she recalls with a sense of amusement.

When the persecution became unbearable she left in disgust and went back to Soweto where she completed her high school studies. As a schoolgirl, she was already showing signs that she was destined for a bright future as a model, beauty queen, glamour girl and performer. A lady of style and substance, she became a torchbearer of the latest fashion trends and graced the fashion pages of popular magazines like Drum and Zonk!

Since then Abby - as she's known by friends - has been every casting agent and show promoter's dream, thanks to her charm, individual beauty and warm, husky voice. She was still a pupil at Kilnerton when a talent scout discovered her singing abilities and arranged for her to perform with the Huddleston Jazz Band. It was a school ensemble that was founded by Father Trevor Huddleston, an anti-apartheid Anglican priest and head of St Peter's, a boarding school for boys in Rosettenville, Johannesburg.

As the band's vocalist, she worked with members such as Jonas Gwangwa, Hugh Masekela, Monty Mahobe (bass) and Zakes Mokae (saxophone) - all of them pupils at St Peter's at the time.

"We used to perform together during school vacations and it was during one of these performances that Miriam Makeba saw me at the Bantu Men's Social Centre in Johannesburg where we shared the stage with the Manhattan Brothers. After the show she invited me to join her group, the Skylarks.

"Working with Makeba meant the world to me. I used to sing Dorothy Masuku's songs and counted Dolly Rathebe, Thandi Klaasen and Thoko Mgcina among these great singers that I regarded as my idols and role models."

Kubeka says it's amazing that after all these years the sisterly bond she had enjoyed with these legendary artists has grown stronger.

"I'm grateful and feel blessed that I was one of them. They groomed me into the person that I have become today."

Generations: The Legacy contract extended after negotiations had deadlocked

Generations: The Legacy has been renewed for two more seasons after a dramatic uncertainty over the future of the popular SABC1 soapie. The public ...
Entertainment
2 years ago

The Skylarks were an all-female vocal quartet whose other members included Mary Rabotapi and Mummy-Girl Nketle. They regularly featured bass singer Sam Ngakane and pennywhistle player Spokes Mashiyane in their hot repertoire of mbaqanga, kwela and marabi.

Singers Marjorie Pretorius, Letta Mbulu and Nomonde Sihawu were also members at some stage. The latter is the composer of Thanayi, a popular mbaqanga number about an obese sibling who has a taste for fast food.

It was first recorded in 1956 by the Skylarks and subsequently by Mama Africa during exile - The Many Voices of Miriam Makeba (1961). Hugh Masekela's version that features Thandiswa Mazwai is the best known and can be heard on his 1999 album Sixty. Between 1956 and 1959 they recorded a number of hits such as Remember Sophiatown, Makeba's Goodbye to Africa, Live Humble as well as Makeba and Mashiyane's Phatha Phatha.

Like Kubeka, the late Ngakane went on to feature in a number of movies and television drama series. Sadly, Mashiyane, whose unique and evocative style of playing the pennywhistle earned him the title "king of kwela", went to an early grave. Kubeka's next big move was King Kong (1959), a landmark stage production based on the life and times of mercurial heavyweight boxer and knockout specialist Ezekiel "King Kong" Dhlamini. She portrayed one of Joyce's girls in her famous Sophiatown shebeen, Back of the Moon - a role which allowed her to give free voice to her love of the blues. Makeba played the part of Joyce the shebeen queen and King Kong's girlfriend, while her other girls were played by Hazel Futa and Suzan Gabashane.

Taxi driver who 'assaulted' Abigail Kubeka is 'on the run'

'I really feel sorry for this boy. He should just turn himself in,' said Abigail
Entertainment
2 years ago

In 1960, Kubeka toured Britain and Europe with the famous jazz musical and even got an opportunity to step into a lead role for three weeks when Makeba was ill. It was Makeba who convinced Kubeka's parents to allow her to be cast in King Kong. They had already conceded to her taking up a career as a performer.

"My parents wanted me to be a nurse and didn't regard showbiz as a profession. They imagined me in that smart nurses' uniform with epaulettes but although I have a caring nature, I couldn't imagine myself working in a hospital ward. I wanted to be an entertainer."

The first-born in a family of five, she remembers that theirs was a comfortable upbringing. "We were neither rich nor poor. Our parents could afford us."

Her mother, Alice Kubeka (nee Mabaso) worked at a tobacco firm in Croesus and later became an assistant nurse at Baragwanath Hospital, hence her wish for her daughter to follow in her footsteps, she explains. Her father, Africa Zibuse Kubeka, was employed at a sweet factory.

He subsequently taught at a night school in Baragwanath Hospital. But he was better known as a football administrator. The former soccer player was also a founding member of Moroka Swallows FC in 1947.

She too would be married to a well-known football official, Kgomotso "Tso" Modise. The marriage was blessed with two children.

The former National Professional Soccer League general manager passed away in 2017. King Kong was a turning point in the history of jazz and African entertainment.

It introduced some of the best local musical talent to the international scene. It was also a passport to a new life of exile for most of these entertainers, including her mentor Makeba, who settled in the US after the jazz opera's run on British and European stages.

Kubeka chose to return and work in South Africa despite the increasing repressive political conditions under a racist government.

"In those days it was very difficult working as a black artist under apartheid. The police were always on our case.

"We experienced problems whenever we required paperwork to travel abroad for performances. Police will ask you silly questions like: 'are you going to meet Miriam Makeba?', 'what are you going to talk about?', 'just know that we are watching you...'"

"On the other hand, while abroad some of the exiles would accuse us of being sell-outs. 'Otherwise how did you get your passport?'" they will ask.

"In fact it was easy to be accused of being a sell-out. For instance, if you go into a police station where you have been summoned for some interrogation session, you were likely to be suspected of being a police spy by some ignorant people. It took a lot of courage to continue working as an artist in those days."

In the next decades she would work on the cabaret circuit with a number of illustrious jazz artists and bands of the era such as Kippie "Morolong" Moeketsi, the Malombo Jazz Makers (Julian Bahula, Abbey Cindi and Lucky Ranku), Mackay Davashe's Jazz Dazzlers and Dimpie Tshabalala's the Jazz Clan.

She has also performed to critical acclaim across venues in Africa, Europe and Asia, appearing alongside stars like Eartha Kitt, Percy Sledge and Monk Montgomery, a jazz pioneer of the electric bass guitar.

She is a leading lady in eight films, notably Dingaka (1965), Africa Shakes (1966), Knock-Out (1969), Soul Africa (1971) and Joe Bullet (1973). She has also made cameo appearances in nine local and international movies. Soul Africa is a musical that celebrates the continent's rich wildlife and diverse cultural traditions through the soul music of Percy Sledge, who appears as himself alongside Kubeka.

In the crime thriller, Gampu plays a detective character who must stop a criminal syndicate from interfering with the fortunes of a local champion football club. Joe Bullet reportedly enjoyed only two screenings at the famous Eyethu Cinema in Soweto before it was banned by the apartheid authorities. In the eyes of the censors, a film that depicted a black man living a luxurious lifestyle was a problem.

"Banning movies and shows was part of life as a black artist. It was nothing unusual, but we took pride in our craft. We were naturally talented performers and excelled despite lack of formal training in the arts. Performers of my generation and those who came before them were products of the bioscopes. The cinema had a huge influence on our acting. We learnt by observing some of our favourite actors in action on the screen."

All-black everything - and this isn't about rapper Jay-Z's celebratory line from the song Run This Town.
Entertainment
2 years ago

The documentary Sophiatown (2003) celebrates this exceptional world-class talent from a bygone but definitely not a forgotten era. The film reflects on the golden age of South African jazz and salutes its magnificent trailblazers - Thandi Klaasen, Dorothy Masuku, Dolly Rathebe, Makeba and of course Kubeka herself. She makes a stunning contribution with a solo version of Yini Madoda, a song that she first recorded with the Skylarks in the 1950s.

It's a lament of the countryside women left behind by their men to work in the city by the migrant labour system.

Last Saturday, December 7, the multi-award-winning artist celebrated her 80th birthday at Ubuntu Kraal, a prime spot for cultural and corporate events situated in her Orlando West neighbourhood, a township famous for its rich cultural history.

Her good friend, Marah Louw, entertained guests as both MC and performer.

TV producer Mfundi Vundla, her boss at Generations: The Legacy, remembered her as a beautiful and talented woman who personified glamour.

Singer Yvonne Chaka Chaka challenged artists for a contribution, a challenge that was taken up by former SABC chief operations officer Hlaudi Motsoeneng, who pledged R25,000.

"I'm extremely grateful to have achieved this milestone and I feel blessed," said the celebrated grandmother and great-grandmother of three.