Meet the man who put the crown on Zozibini Tunzi 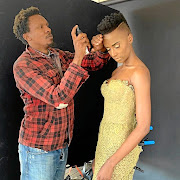 Miss Universe Zozibini Tunzi's signature TWA (Teeny Weeny Afro) does not cost R5 or R20 as social media hecklers have been claiming; it cost her R180.

Jawad Maphoto, the man who has been taking care of Tunzi's crown for the past five months, said: "Sometimes they could be things we add to the haircut that could make it cost more than R180. [It all] depends on the client's request," Maphoto said.

The 39-year-old celebrity hairstylist is the owner of Lajawi Salon in Midrand, Johannesburg.

"Someone in Tembisa obviously wouldn't charge as much as someone based in Sandton, for example. Issues of rent and quality products come into play. The price is justified by a lot of things that we offer and the care we give to our client.

"We use [hair] colours that can intensify such a simple cut. So, it's the extras that make the cut. You can get the same cut with the guy cutting hair under a bridge but with us, it's about understanding how to take care of hair."

Maphoto first met and started doing Tunzi's hair during Miss SA's top 16 round. He has also worked with former Miss SA Demi-Leigh Nel-Peters before she was crowned Miss Universe in 2017.

He worked with Tunzi on all her media appearances during her reign as Miss SA.

Maphoto will touch up her hair two to three times a week depending on her schedule.

The last time he worked on her hair was just before she jetted off to Atlanta on November 27 for Miss Universe.

He said more women started to ask for the haircut that they have now coined the "Universe Haircut" after Tunzi won Miss SA in August.

"It's benefiting us in the sense that it's more recognition. Sometimes you just don't know when your moment will come," Maphoto said.

"You just have to keep working hard and be passionate about what you do."

Maphoto, who was born in GaMaphoto village near Sewabarwana in Limpopo, started in the hair business as a cleaner in a Polokwane salon in 2003. He progressed to washing clients' hair. Before then, he was selling sweets and snacks on the streets. He also had a stint in retail.

"I guess sometimes our parents don't pay that much attention to our skills. In retrospect, I have flashbacks of me hanging out with guys who were cutting hair, from when I was 10.

"I used to perm family friends' hair. It's those flashbacks that make me realise [that] it's always been my calling," Maphoto said.

He opened his first salon in 2006 in Johannesburg. Some of his high-profile celebrity clients include Bonang Matheba, Minnie Dlamini and Terry Pheto.