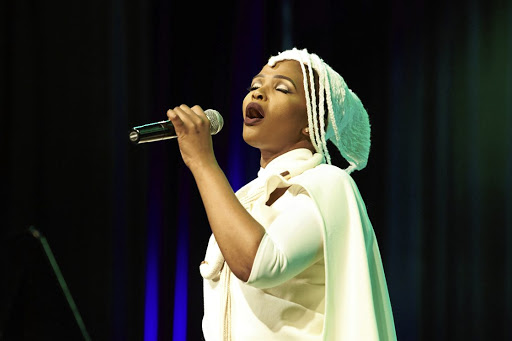 The 39-year-old goddess, much like Disney's powerful fairy, Maleficent, cast a spell on everyone as she strolled into the Sowetan offices on a rainy afternoon.

"Who is she? She's very beautiful," says one of the security guards later as she steps out of the building in Parktown, Johannesburg.

It's not much of a surprise as that's the kind of star power she commands.

She is sporting a chic blonde short haircut with a fade, and clutching a metallic coat worn over a monochrome dress. But she is nothing like the Disney's "Mistress of Evil"; in fact, her aura, approach and character are warm, kind and down-to-earth.

Before we can sit down she asks for some coffee. "I'm not a coffee person but today is just one of those days," she says as we step into the elevator.

Dana is texting frantically on the phone and taking calls in between. She is putting the final touches on her concert, the Simphiwe Dana Symphony Experience, at the State Theatre in Pretoria tomorrow night.

When we arrive at our small canteen with a limited menu, she settles for a cappuccino and chicken tikka pie.

"My voice started cracking when I sang, and vocal cords are like lips when you sing, they flap," she explains.

"So one of my vocal cords had scar tissue and so my voice would slip off note involuntarily. I initially thought I needed to warm up more. I went to the doctor and checked."

Popular musicians Zonke, Thandiswa Mazwai, Caiphus Semenya, Samthing Soweto and Ringo Madlingozi will headline the event which will run from 1 to 22 ...
SebenzaLIVE
2 years ago

Dana had for almost two decades been the soulful voice of a generation. With her piercing voice and socially conscious lyrics that stimulate both the heart and brain, she revamped an unapologetic woke era in music with her debut album, Zandisile, in 2004.

She followed with her masterpiece, The One Love Movement On Bantu Biko Street in 2006 and Kulture Noir in 2010 as well as sleeper hit Firebrand in 2014.

Last December, there was a complication that threatened to silence the queen forever.

"It was a very intense surgery. I didn't have a voice for two weeks and I couldn't even say anything after that surgery," she recalls.

"I have never felt more helpless in my life. I was freaked out. Even when I came back and it still sounded weird, I thought this surgery didn't work.

"Now it's back to normal but had I known that, I would not have spent this entire year just freaking out, thinking that nothing got fixed."

Just three weeks after her surgery, she was in Italy performing with an orchestra.

Dana says her voice was strained from years of not warming up carefully and just belting up to reach those high notes.

"You don't get taught that a singing voice will suffer from wear and tear over time if you don't treat it a certain way," she observes.

"I still don't know how I did that [perform in Italy] because it takes a year for vocals to heal completely after surgery.

"I could sing still but I had to manage my voice. Now I can belt it out but I'm not going to do that because I have learnt that I need to take better care of my life," she says.

After five years of not releasing new music, Dana is ready to bless fans with a new record.

She will release the new album, titled Bamako - the capital city of Mali - next year. She spent a few weeks there to finalise the album earlier this year. She co-produced the album and says the recording process was similar to that of Kulture Noir.

"It's been a really weird year because I have been finalising my album. So, I have been dealing with the stress that comes with a lot of politics," she says.

"The album is amazing. It has pan-African elements to it. I went to Mali to add some spice that's not from SA in line with my pan-African ideals.

"I was much more hands-on in the production. Even the writing, I will first do the instrumentation in most of the songs instead of singing them acappella and adding instrumentation after.

"That was quite a vibe. I'm basically a co-producer on the album with someone else that I won't mention."

Fans will tomorrow get a first taste of her new music at the concert. Dana says she will not rest until the project goes national and eventually international.

US-based Rwandan artist Somi, Daymé Arocena from Cuba and local songbird Amu Faku are also on the line-up. Everyone on the line-up, from the orchestra to the choir and music director, are all black.

Just weeks after being admitted to hospital with skin cancer, gospel star and pastor Neyi Zimu has died.
News
2 years ago

"I'm not a Cassper [Nyovest], I'm not going to hype it up crazy on social media so that brands want to jump on. My crowd is very different from that. On some days I wish I was more like Cassper because he gets things done," she says.

"This is a huge project and it's just little me trying to do it. I have a vision and dream - I'm doing everything in my power to make all of that a reality. It's not easy because the arts don't enjoy the same kind of support as sports.

"You have to squeeze water out of a stone. But I have faith that I will get support from my fellow South Africans until it goes national, especially because of what it's premised on - African unity, African cohesion, uplifting young black talent and women."

Dana has done it all throughout her illustrious music career that has yielded four albums. Her music is part of the curriculum at the prestigious Oxford University in England.

She also made her acting debut in Themba: A Boy Called Hope.

"I think I've done pretty well. Even my mistakes, I think I've owned them and I've learnt from them. I think they were necessary so I learn something new. I don't have any regrets," she says.