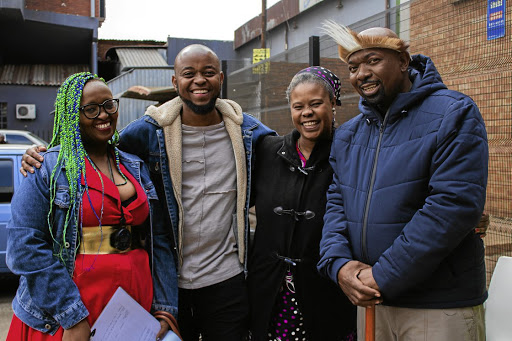 Thato Molamu, second from left, with Nthati Moshesh and Menzi Ngubane and one of the students from Molamu's film school. /supplied

More than 100 township film students have teamed up to release short films with a strong social message aimed at gender-based violence.

The students are from Leaders in Motion Academy (Lima), co-founded by former Generations actor Thato Molamu.

The MICT Seta-accredited film and television programme first opened its doors last October. It has campuses in Eersterust, Pretoria and Alexandra, Johannesburg.

Since Monday and for the duration of 16 Days of Activism of No Violence Against Women and Children, the students will release one short film everyday on their YouTube channel to highlight issues of gender-based violence.

"Since we are in the township, we are very socially conscious - there are a lot of social ills. We want to develop not just filmmakers, but people that are socially conscious when it comes to their craft," Molamo said on the inspiration behind the campaign.

"But we also wanted to start a campaign that will spark conversation in our society that will bring change. I love seeing the young filmmakers coming into their own and you get pleasantly surprised by what they are able to produce."

The Sol Plaatje University in the Northern Cape has started making progress in increasing the number of women in top and senior management in ...
News
2 years ago

One of the rising filmmakers is Karabo Dibodu, 36, from Rustenburg.

Dibodu is the writer and director for one of the films, Senzeni Na?

The short film that is yet to be released explores the root behind the cruelty of perpetrators of gender-based violence.

"My father played a strong role in making me conscious as his son to understand how to love and treat women," he recalled.

"I remember when I was younger, one friend was rude to a female. He went on to physically assault her. I stopped it, because I immediately knew it was wrong because I have never seen my father do that."

Dibodu drew inspiration from horrific stories of sexual assault that he heard from the women that he has dated.

Dibodu collaborated with Relebogile Maifadi ,24, from Mabopane on the film. She is the producer of Senzeni Na?

TV star and presenter Thato Molamu, who has been heading his own Gateway Media company since 2013, has stepped down as creative director.
Entertainment
2 years ago

She strongly highlighted the importance of grooming the "boy child" in the fight against gender-based violence.

"As women, I think it's time that we break away from us conforming to patriarchal ways of doing things. I want us to be in a society where we are good and feel safe," she said.

"We need to attend to the boy child too. While we are mostly the victims, we have to look at the problem from the root.

"Let's take care of the boy child so that they don't grow up to be individuals whom are hazardise to the environment."

The three short films that have been released are I Said No, Boys to Men and Words.