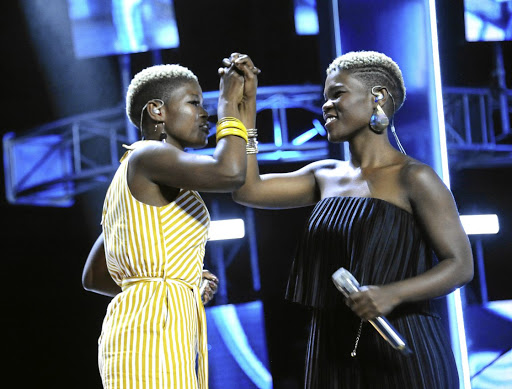 Virginia and Viggy Qwabe during the 'Idols SA' competition. The twins have been in the news since leaving the talent search show following Virginia's elimination, which prompted Viggy to exit in protest. Some say the walkout was instigated by their father. The pair has now moved on and about to launch their music careers through a single 'Hamba' this week. /Oupa Bopape/ Gallo Images

The Qwabe twins, Viggy and Virginia, are ready to take on the music industry by storm and will drop their first single Hamba.

The twins, whose exit in the Idols SA competition was dramatic after Virginia was eliminated based on the low public votes, have plans on track to releaseHamba on Friday.

Viggy took a decision to exit the competition on the night her sister was eliminated.

In their new song, the pair have collaborated with seasoned music producer DJ Tira.

The twins' brother and manager, Siphiwe Qwabe, said the two were ready to launch their career in music.

He told Sowetan that his sisters were not ready to speak to the media yet.

"I know for fact that they are ready to launch their careers officially next week and they have big dreams about the industry.

"I know that they love music more than anything and they will make it work," Qwabe said.

"They are looking forward to the release of the song on Friday. As much as it is their first song they are not worried about the public's reaction. So far, the promo of the song shows that people love it."

Qwabe explained that Hamba was an Afro-pop song that is fused with a bit of amapiano sound.

He said the song was actually about a girl who has had enough of being played by her boyfriend, so she's literally telling him to go - hamba!

Following a dramatic exit in Idols SA, the Qwabe twins, Viggy and Virginia, have turned down the invite to be part of the finale next week.
Entertainment
2 years ago

Dispute over Qwabe twins: DJ Tira hasn't spoken to us

"We have been in contact with them and they have not indicated that they would like to be removed from their management contact."
Entertainment
2 years ago
Next Article