President of the Republic of Exta Cold, Pearl Thusi, gears up for the mother of all parties 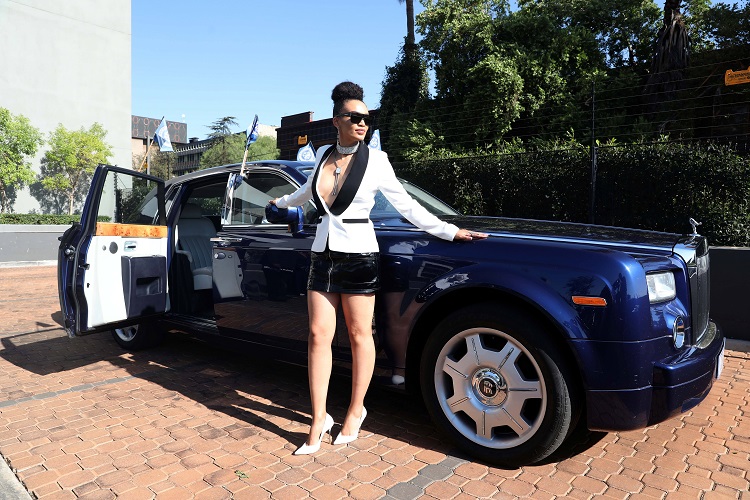 Actress and tv presenter Pearl Thusi as president of Republic of Extra Cold arriving in a Rolls Royce. Thusi will be the main face of the campaign ahead of Castle Lite's summer voyage in the Atlantic Ocean.
Image: Thulani Mbele

Everything almost came to a standstill when actress and presenter Pearl Thusi arrived at 16 Empire Road in Parktown, Johannesburg,  on Tuesday.

Pearl rolled in in a navy blue Rolls Royce, accompanied by bodyguards and two Harley Davidson motorbikes. Both male and female colleagues stood by in awe of her beauty and the toys she came in. The actress decided to visit media houses to announce her upcoming biggest party,  'The Republic of Extra Cold', on December 28.

It will be hosted by Castle Light somewhere in the Atlantic. Pearl, who is also an ambassador of the brand, will be the 'President of the Republic'.

Asked why she decided to visit media houses instead of hosting a press conference, she said: “Because that's what the president does. They go to people. They get in the car and [are] accompanied by bodyguards. The president came in a Royce just to make everything look cool.”

Pearl Thusi is paying tribute to her bestie, DJ Zinhle.
Entertainment
2 years ago

The party will have the president and  ministers, and among them is  Donavan Goliath - the Minister of Vibe; Junior Khoza - the Minister of Summer Bod; and Boity Thulo - the Minister of Drip. Pearl  explained that she was not involved in choosing ministers. “I don’t take the decisions, but I make sure that everything happens. I  make sure it is fun and it goes well.”

She said the  Republic of Extra Cold started in 2016 where it was held at the  Platennburg Bay in Western Cape. “We came up with the concept in 2016.  I have travelled and grown up  but I am still the president. The upcoming party  is going to be beautiful, we have  insane line-up. If you have the right type of people, performers, what else do you want?”

Pearl Thusi has decided to "change her Twitter ways".
Pic of The Day
2 years ago

Pearl and Bonnie's debate on colourism got real personal.
Pic of The Day
2 years ago

Looks like school was in session...
Pic of The Day
2 years ago
Next Article