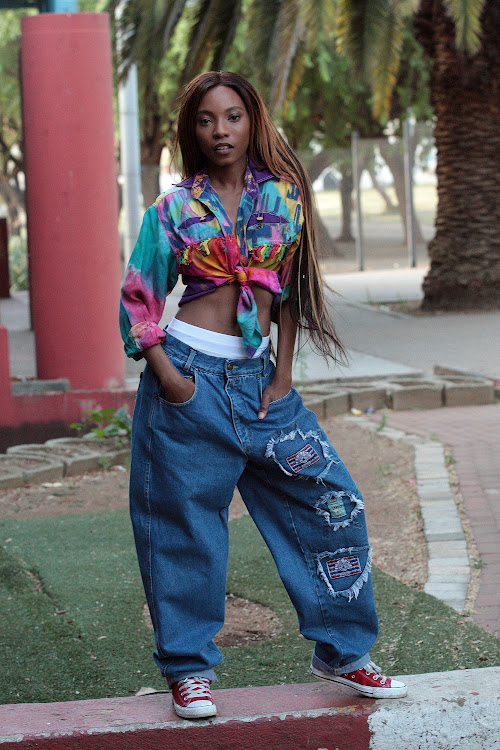 It was on a dull autumn Sunday afternoon in March that I first got a hunch that Bahumi Mhlongo would play Lebo Mathosa.

The 24-year-old daughter of famous parents Somizi Mhlongo and Palesa Madisakwane was anxiously waiting to audition for the role of a lifetime. I had tried to reassure her that the audition would go well since she was particularly nervous about getting the dance choreography she had rehearsed right.

The feeling I got wasn't because of her uncanny resemblance to the late firecracker but rather the fire and hunger in her eyes to play the role.

Now six months later, she has landed the role to play the younger Lebo in BET Africa's much anticipated six-part biopic Dream: The Lebo Mathosa Story.

Time Out visits the pint-sized star on the set of the biopic at Newtown Music Factory - formerly Bassline - in Johannesburg.

Bahumi is still worried about getting the dance choreography right.

"Shooting has been going well. I'm shocked at everyone's response to my acting on set. I'm really hard on myself," she says.

"I really want to make my biggest critics, family and myself proud. So I put a lot of pressure on myself regardless of the pressure that is put on me by others.

"I went overboard with the research and I was so nervous when I got on set. But to my surprise everyone was just so welcoming."

Actress and singer Keabetswe "KB" Motsilanyane is the busiest on the day, filming her scenes as the older Lebo.

I'm fighting for her attention as she's shooting a scene with co-stars Khabonina Qubeka, Connie Chiume and Charmaine Mtinta.

Actress Enhle Mbali Maphumulo is putting the finishing touches to her debut fashion collection set to showcase in a week.
Entertainment
2 years ago

Sporting a bleached blonde cut, she flaunts her legs in a fuchsia bodycon number to complete her risque Lebo look.

It takes 10 minutes for another journalist to recognise that it's KB under the look.

She quickly changes into another sexy look, with micro shorts and a Grace Jones-esque hood. 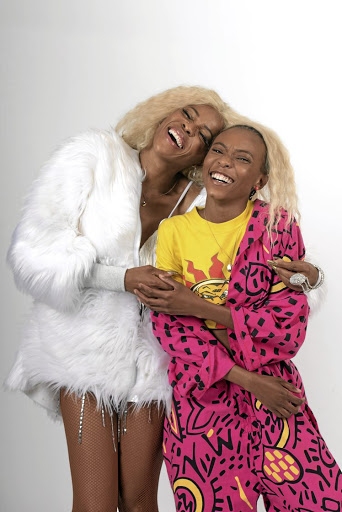 KB Motsilanyane, left, and Bahumi Mhlongo on the set of the much anticipated six-part biopic, Dream: The Lebo Mathosa Story.

"My approach to this is, I'm not trying to be Lebo. I don't think anyone can be Lebo. I'm here to tell her story," KB clarifies.

"As an artist who has been in the same industry as her, I want to tell a story that people will enjoy and appreciate.

"The role is big because she was a triple threat and I have to be that. It has stretched me so much.

"I can sing, dance and act but I never had to do all of them all at once. Another challenge is that Lebo was a beast; you can't be all of her."

Bahumi had auditioned to play the older Lebo but to her surprise was cast as the younger version.

"What's funny is that I wanted to audition for younger Lebo but when I realised that my age didn't qualify for the casting call I was forced to do older Lebo," she explains.

"I was just too scared to do older Lebo because as an actor I just felt intimidated. I'm still very new in the industry.

"The younger Lebo was cool and vibrant; I always thought I had that spirit. Older Lebo has got all those characteristics that I haven't grown into."

Bahumi's casting was met with a backlash, with many on social media suggesting that she had got the role because her famous father, Somizi, was close friends with Lebo.

Somizi was not even aware that she had auditioned for the role.

"My relationship with my father and his friends has always been that those are his friends and I'm his daughter. I've never asked him about his friends," Bahumi says.

"I've had a lot of media backlash all my life, especially with my parents. I have developed a thick skin.

"Years ago I would have just broken down, and it has happened like that before. There were things that I read that got to me but I trust in God's plan for my life and the people that I work with.

"They know what they are doing and if they chose me, I should trust in that."

KB has met Lebo before, although they were never friends. She recalls that as a member of music band Crowded Crew, Lebo once wrote a verse for her.

This will be Bahumi's big break-out role when the production premieres on November 6. She last starred in the SABC2 telenovela Keeping Score.