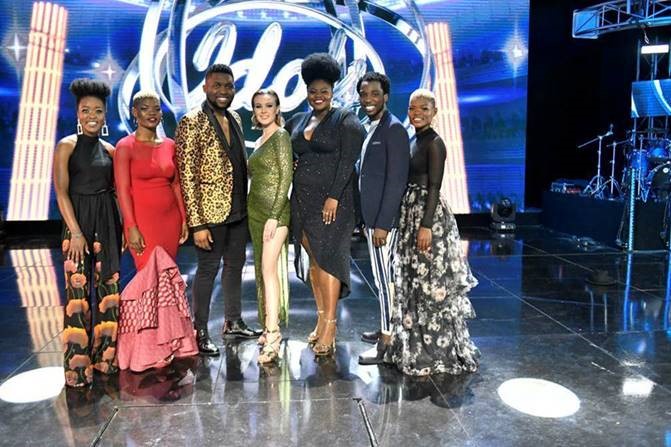 The top seven are now vying for a spot in the top 6
Image: Supplied

Idols SA’s “cat with nine lives” Nqobile Gumede gave it a good fight for a number of weeks and managed to beat the odds on so many occasions. But as Sowetan predicted last week, those nine lives ran out on Sunday night and she bowed out.

The theme for the top 7 was love. But who had us feeling all mushy on the inside and who had us love sick for all the wrong reasons?

Here are this week’s three top favourites and the three who are in danger of missing out on the top 6.

Be warned. There will be a baby boom in nine months after Nolo gave a sensual rendition of Close the Door by Teddy Pendergrass. At this rate Nolo has cleverly positioned himself as the front runner to win the competition. Nolo came to seduce and he more than did that – I mean, did you see how low-plunging his man cleavage was? That combined with the leopard print jacket was a lot of sauce. He made love to that stage. I agree with the judges, it was the best performance of his Idols SA journey, because for the first time he showcased his impressive vocal range.

After weeks of lukewarm performance, Micayla returned to top form. You don’t mess with a Whitney Houston song, that’s the first rule in singing covers, but Micayla went there. She surprisingly did justice to it, because she made Run to You her own and didn’t mimic Whitney. She belted it out with so much ingenuity, teen spirit and vulnerability. By the time she was done, even a jilted heart wanted to get up and fall in love all over again.

It’s funny how three simple words like I Love You – which is the title of the late Thami Shobede's song that Luyolo chose – can carry so much emotion, feeling and memories. To his credit, Luyolo’s falsetto is airy and soft as butter. The performance was effortless, romantic and heart-melting. Luyolo connected so much with the audience that at one stage I felt like he was specifically serenading me with the song.

Proverb is not here for arguments about whether he is better at presenting than Bonang Matheba..
Entertainment
2 years ago

Hits and misses as Idols SA contestants give OTT performances

This week’s Idols SA provided the first upset of the season. Did Dinky Kunene really deserve to go home?
Entertainment
2 years ago

The twins need a wake-up call. As lovable as they are, Virginia and Viggy are stuck in a rut. I will say Virginia is in deeper trouble than Viggy, because her rendition of Yim’ okthandayo by Linda and Zanda Zakuza flat-lined. Virgina didn’t show any fighting spirit and was absent. She didn’t attempt to connect with the audience; instead she waited for the chorus to elevate her vocals. It was not fun to watch. Viggy took on Sthandwa Sam by The Legacy and it was not the worst, but it was safe and guarded. She was in a comfort zone yet again and we have seen this kind of performance countless times from her. The twins have got monotonous, predictable and boring.

Let me open by saying I’m a huge Mmangaliso fan and it pains me to put her name down here. As the most versatile performer – even more than Nolo – in the competition, she took a risk. But sometimes risks don’t pay off. Her take on Be Without You as performed by Mary J Blige was quirky and cool. It’s the stuff you expect in YouTube covers, extremely charming. But I failed to feel love in the air. It was forgettable and not special enough. The only thing counting in her favour is that the song was a big sing-along; maybe nostalgia will save her.