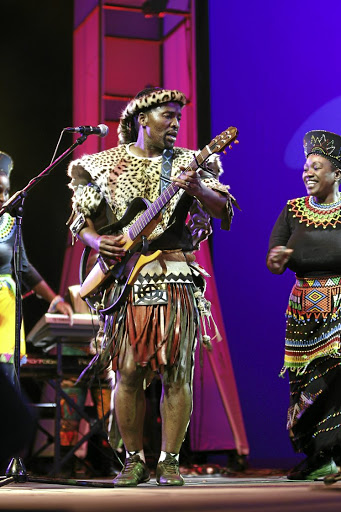 Maskandi legend Ihhashi Elimhlophe ventures into acting as he stars in a new TV drama series.

Born Bheki Ngcobo, Ihhashi kick starts his acting career with a role in Mzansi Magic's Ifalakhe, which premieres on October 6. The drama series is about raging kingdoms, power-hungry kings and their deceptive family members.

The maskandi singer and guitarist from KwaZulu-Natal portrays the role of inkosi Ndukuzakhe. He stars alongside experienced actors Bheki Sibiya, Chris Radebe and Sthandwa Nzuza.

Ngcobo never imagined himself acting. "They [the producers] approached me to be part of the show and I was not sold. It took a family member to convince me to agree to act on the show," Ngcobo said.

He added: "I won't lie, it was difficult at first. Remember, playing guitar and acting are two different things. The part that was a challenge was the reading of script, and rehearsing. But I really enjoy it now."

Created by Stained Glass, Ifalakhe is a story of the Okuhle tribe, who waged war against the Khanya people who have been raiding their cattle and killing their women and children.

Director of Stained Glass Mmamitse Thibedi said: "What makes the situation even more complex is that Khombindlela, the Okuhle king, finds his tribe on the brink of suffering harsh repercussions from a prophecy that hangs over his head."

Iconic maskandi singer Ihhashe Elimhlophe has signed a recording deal with  Universal Music Africa in an effort to take his brand to another level.
Entertainment
2 years ago
Next Article