Another gong for legendary Jonas Gwangwa 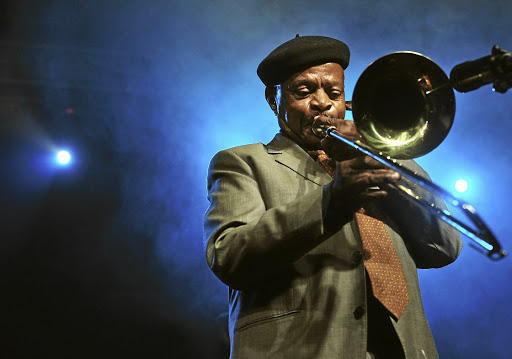 Legendary trombonist Jonas Gwangwa will be honoured for his invaluable contribution to the growth of South African music.

The 81-year-old, who is now recovering after being troubled by ill-health recently, will be honoured by South African Afro Music Awards (Saafma) on October 19 at Wits Great Hall, Johannesburg.

The celebration of Gwangwa's career started at the Standard Bank Joy of Jazz in Sandton at the weekend where his albums, awards, and articles written about his career were put on display.

The music stalwart, who went to exile and made his name while performing in the US, will be honoured alongside Jabu Khanyile and Stompie Mavi, both late.

Saafma founder China Mpololo said they wanted to honour Gwangwa while he was still alive for his contribution to the growth of local music.

The 2019 Standard Bank Joy of Jazz edition was off to a good start last night as South African music stars presented mind-blowing performances.
Entertainment
2 years ago

The organisers have chosen singer and composer Brenda Mntambo to perform on the day of the honour of the renowned trombonist.

They had initially preferred Gwangwa to perform on his big day but changed their minds in view of his recovery journey.

"We realised that many legends get honoured when they have actually passed on. People like Bra Jonas and Caiphus Semenya deserve to be celebrated and their work must be documented by local institutions," Mpololo said.

"If we don't do that, the younger generation will never know the role that these icons played in the Struggle and the music industry."

Gwangwa's son, Mojalefa, said the awards meant a lot for the family.

"My dad has received numerous awards from outside the country before and he appreciated that. But all the awards that he gets at home are even more special to him. It is pleasing for the family to see him being recognised for the role he played in the music industry," Mojalefa said.

"When we were younger, we always thought dad was making noise whenever he was playing his piano at our back room in Botswana. We actually did not know that he was creating a legacy."

Mojalefa said his celebrated father met the New Orleans-born jazz singer Wynton Marsalis, who was in the country where they spoke about a possible collaboration.

Former member of The Jazz Epistles, Jonas Gwangwa will reunite on stage with the equally world-renowned Abdullah Ibrahim and Hugh Masekela . This ...
Entertainment
5 years ago

Khemese showered with praises at memorial

Soweto String Quartet member Reuben Khemese was remembered as a unifier who had a sense of humour at his memorial yesterday. Khemese, 62, died on ...
Entertainment
5 years ago

Embattled former SABC COO Hlaudi Motsoeneng yesterday used the memorial concert for Thandi Klaasen to take aim at his detractors. He told the packed ...
News
4 years ago
Next Article