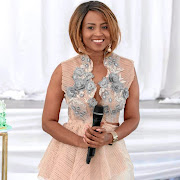 Not having role models and people who understand acting around when growing up has driven television star Milicent Makhado to dedicate her time teaching kids from rural villages about acting.

Makhado, who shot to stardom when she portrayed the role of Agnes Mukwevho in Muvhango has been going to different schools in Madombidzha, Louis Trichardt.

Unlike her, who had to learn everything about acting while studying at the Market Theatre Laboratory, Makhado wants them to understand the industry before they get into it.

Through her project, which is supported by the department arts & culture, she helps them choose from a wide variety of career choices.

"I come from a village and no one taught me these things. As much as I wanted to be on TV, I did not know how these things work because the people around me did not know anything about acting.

"I have gone back to these villages because I know many students cannot afford to study acting because they come from poor backgrounds.

"I teach them the knowledge, the skill of acting, and behind the scenes."

Makhado says that when she wanted to pursue acting her dad, a lawyer by profession, was not enthusiastic about it.

He wanted to see his daughter become an engineer.

It was her mother who was supportive, having named Makhado after actress and model Millicent Mseleku.

"When she was pregnant she bought a Drum magazine and on the cover there was Millicent Mseleku. She understood and supported me when I wanted to go into acting."

In her current role in Makoti, a drama series on SABC1, Makhado plays Zandile, who is married to Pastor Siyabonga Khambule.

Makoti focuses on relationships by exploring behaviour, expectations and assumptions - the reasons behind why people choose to get married, opt to separate or get divorced.

"The situation has caused a lot of conflict for the couple."

Makhado landed the role after months of going to auditions without success.

"Sometimes you audition and you feel you killed it. Three months down the line you see another person got the role. It is painful but there is nothing you can do. You move on."

As a survivor of abuse. Makhado says social media has helped many people to talk about experiencing abuse.

". many women suffer in toxic and abusive relationships because they are afraid to be judged by family members, friends and women in general.

"I encourage them to open up because talking heals. The only way to assist someone in an abusive situation is to love them because once they feel the love it is easy to open up."