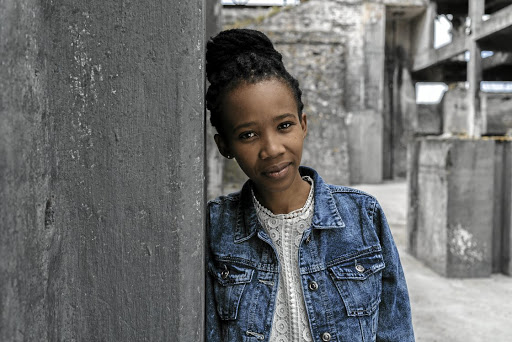 After successfully launching her TV and film career, actress Zimkhitha Nyoka goes back to stage to whet her acting appetite.

Nyoka, who has appeared in many TV shows, has shown exceptional acting capabilities since her introduction to local television five years ago.

The petite actress from Qamata in Cofimvaba, Eastern Cape, returns in style with a lead role in an all-female cast show called Xova.

Written and directed by Joseph Komani, the play tackles the biggest problem in the country of father absenteeism in the upbringing of children and highlights the brunt women carry in solo-parenting.

The winner of the 2019 Standard Bank Gold Ovation Award, Xova is set to run at the South African State Theatre in Pretoria from September
11-29.

The play is told through poetry, narration and movement. Xova touches on many challenges faced by women in the society and other social ills.

Nyoka explains that Xova is used as a metaphor that refers to the hustle and struggle that women face as they raise their kids alone.

"The story touches on many social ills such as prostitution, toxic mothers, toxic community and how girls inherit toxic habits from their mothers."

"Xova also looks at how women are compromised and forced to sell the only powerful tool they have which is their bodies."

Makhado, who shot to stardom when she portrayed the role of Agnes Mukwevho in Muvhango has been going to different schools in Madombidzha, Louis ...
Entertainment
2 years ago

The 29-year-old explains that the play teaches the audience to recognise their trauma and how to deal with it before passing it to younger generations.

The play is led by Nyoka and seasoned television and stage actress Charmaine Mtinta. Nyoka is excited to be part of the cast that tells a painful women story.

"It is fantastic because we can really express ourselves easily without restrictions and take audience with us. We are telling the story with conviction. The problems we talk about in the show are things that we can relate to."

Nyoka, who last acted in a theatre production in 2014, is excited to make her way back to stage theatre after a busy schedule with TV productions. These include shows such as Gold Diggers, Isithembiso, Mutual Friends, Ngempela, Nkululeko, and The Hot Zone.

Nkoka, who dropped out while doing a degree in botany at University of Johannesburg to pursue drama, says theatre brings out the best in her.

"It has been quiet. This is a huge come back for me it has been really exciting and challenging. I missed acting in theatre a lot. I was beginning to feel that I am losing the spark."

Nyoka, who thought she could be a scientist and actress at the same time, enjoys acting with all its challenges.