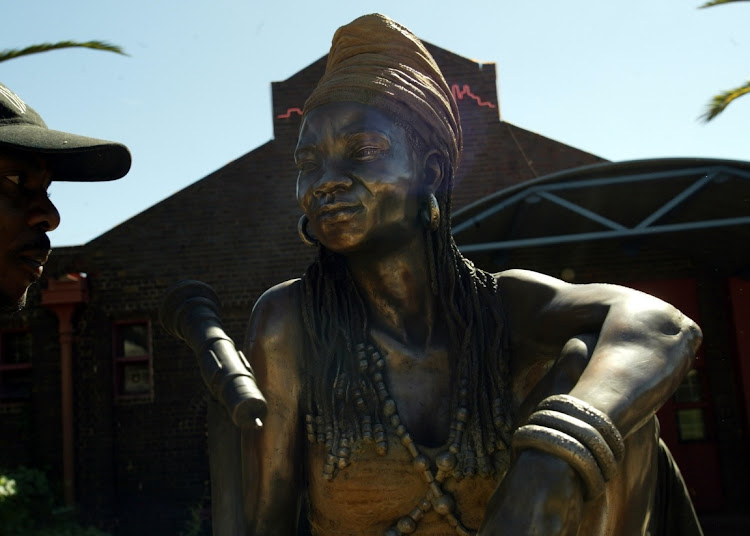 The much-loved statue of Brenda Fassie is displayed in Newtown, Johannesburg, in 2006, the year it was unveiled under the auspices of the Sunday Times Heritage Project. After undergoing repairs, it is back at a new home nearby.
Image: Tebogo Letsie/Sunday Times

A life-size statue depicting the late singer Brenda Fassie will return to the Newtown district of downtown Johannesburg - this time in pride of place outside the Market Theatre.

The bronze piece was sent off for repairs in June, and the city contemplated moving it to a different location, such as Constitution Hill, because of fears of vandalisation. Public consultations ensued, with the vote firmly coming in on the side of Newtown.

The statue shows Fassie casually sitting on a stool on a stage, before a mic, with an empty stool next to her, inviting the viewer to come closer and take a seat. It was first installed outside the Bassline music venue in Newtown in 2006, after being commissioned by the Sunday Times centenary heritage project. The following year, a "drunk" man broke the microphone off the statue - after bending her mic towards him so he could "sing like the late pop diva".

"The safety of the sculpture was of key concern in the discussions. The Market Theatre Foundation and Newtown Improvement District have demonstrated that they can provide 24/7 security," member of the mayoral committee for community development Nonhlanhla Sifumba announced on Wednesday.

Sifumba said the "much-loved" statue of the performer, also known as the Queen of African Pop, would now occupy a "place of honour" at the public plaza outside the Market Theatre.

"MaBrrr will always have a place in our hearts, and a home in our city.

"The Brenda Fassie statue is one of the few public art pieces of real, historical women in Johannesburg. While Johannesburg has more statues of women than many other major world cities, the majority are anonymous figures representing an abstract concept, rather than real individuals."

Many people have been left confused and upset after the historic Brenda Fassie sculpture in Newton, Johannesburg, mysteriously vanished.
Entertainment
2 years ago

The city said in a statement that her interactive statue receives streams of visitors, including tour groups and students visiting nearby attractions. "Each day, many people interact with the statue: sitting next to the singer in the empty chair, created for this purpose, taking photos, posing by singing alongside Brenda or just ‘chilling with Brenda’."

The new site is just down the walkway from the Kippies venue and the similarly interactive Kippie Moeketsi statue.

Ismail Mohamed, CEO of the Market Theatre Foundation, said: "These two legends speak to two different eras in South African musical history and to two different generations of music lovers, but these two statues in conversation with each other in the precinct will resonate the dynamism of South African culture."

The artist who created the Brenda Fassie statue, Angus Taylor, said the sculpture was not designed to be a monument. Instead, it was meant to be humble and at street level, so that the public could easily interact with it.

"She belongs to the people, thus public accessibility is key," said the artist, who will help to move the artwork.