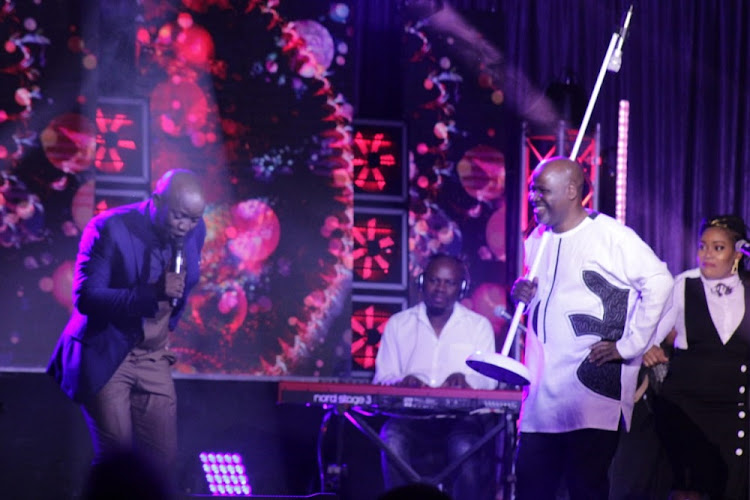 Sipho Makhabane looks on as Karabo Tlhape, one of the youngsters he's unearthed in the North West, sings.
Image: Letlhogonolo Moleah

A group of aspiring musicians  from North West have applauded gospel icon Sipho Makhabane for giving them a platform to launch their careers.

The young people who were unearthed by Makhabane as part of his legacy foundation programme performed in front of hundreds of music fans for the first time last night (Saturday) at Victory Celebration  Church in Mafikeng.

The 14 young people come from Lichtenburg and Rustenburg in the North West. For two weeks, the group went through a hectic voice training and workshops by local music stars. The group that is now known as North West Praise recorded its first CD live yesterday.

Makhabane said:"  I am pleased by the performance of these kids. You won't believe that this is the work of two weeks. They have shown that they are hungry for this. I have noticed that North West has a lot of untapped talent."

The group members who spoke to Sowetan said they had been dying for such opportunities which are hard to come by in North West. They saw Makhabane's initiative as something that will not only make change in their lives but also encourage other young people. Some have tried their luck in Johannesburg but failed to break through.

"We have seen different artists coming to North West and promise to come back and help which they never did. But Makhabane came back and made a difference," Ntswe said.

Malebo Thlapi  said being part of North West Praise was going to expose her talent.

"Working with Phindile, the vocal coach, has been amazing, we have learnt about vocal dynamics and characterisation. Makhabane has taught us the importance of being humble and respecting. We never thought we will get such an opportunity."

Jalin Ellford from Lichtenburg said:"Being  part of this North West Praise is an honour and privilege. I have been praying for this for my whole life, to purse my dream and passion [in singing]. The project has changed my life," said Ellford.