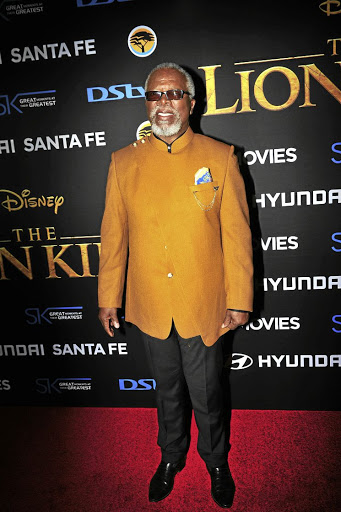 Thespian John Kani believes that the move to screen The Lion King film alongside live music by the Johannesburg Philharmonic Orchestra at Sun Arena in Pretoria at the end of the year will put Africa in the spotlight.

The exciting entertainment initiative was announced yesterday at a press co nference in Hyde Park, Johannesburg.

The Lion King features the voices of artists such as Kani, James Earl-Jones, Donald Glover, Seth Rogen and Beyoncé.

Kani said it was time for Africa to grab the opportunity with both hands and establish links between Hollywood, Disney and corporate South Africa.

The theatre legend said what people would be witnessing in Pretoria would not be entirely new because it existed in the 1920s before sound in films was invented.

He said, however, that live music accompanying the screening will enhance the viewing experience. "We used to watch silent movies with a pianist playing underneath, playing all the emotions and we could easily follow.

"Disney, in partnership with FNB, have created this opportunity and 8,000 people will be sitting in the arena, watching a huge screen. Underneath it will be the JPO conducted by Brandon Phillips," he said.

Kani said he was excited to be part of The Lion King as this will able him to tell stories.

"When the opportunity comes to tell a story of The Lion King, I feel so good because I always believe that it is our story.

"Whenever you listened to something live there is an immediate connection. It is almost like watching a movie with dubbing," Kani said.

Christine Service from Walt Disney Company Africa said in a statement: "We are thrilled to be collaborating with FNB in bringing these world-class and unforgettable Disney live events to South African audiences over the next year."

Raj Makanjee, CEO of FNB Retail, said: "We are delighted to collaborate with Disney to bring these family events to South African audiences."

The Pretoria event will be staged from December 10 to 12.

“Now begins another tale told about my continent, about my country, about my people and about my heritage. These animals are mine.
Entertainment
2 years ago

Busiswa is here to get amped for the weekend.
Pic of The Day
2 years ago