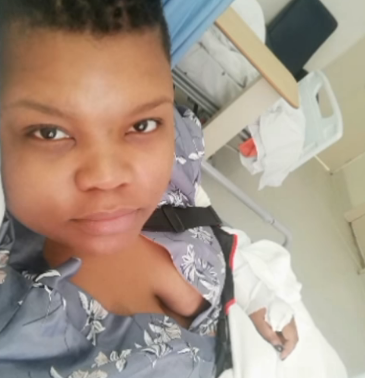 Khanysia Mbuthu was involved in a car accident with her partner Mbongeni Mavuso
Image: khanyisa Mbuthu/Facebook

Members of Afro-pop group Iziqhaza have been forced to postpone their upcoming events after being involved in a serious accident.

Khanyisa Mbuthu and Mbongeni Mavuso had a brush with death on Sunday last week when their car rolled more than three times in KwaZulu-Natal.

Though the two have been discharged from hospital, doctors have advised them against any hectic activity.

The duo were set to perform in Morningside, Durban, to launch the video of their latest song at the weekend and to perform live on August 17.

"We are disappointed that the event that we looked forward to this weekend has been postponed. We had to postpone because we are still in pain," they said.

Many may recognise the 33-year-old curvaceous beauty as the lead singer of traditional music group Iziqhaza.
Entertainment
3 years ago

They were driving back from a gig in Nongoma with their driver when the accident happened at around 2am, after stopping at Mvoti, near Stanger.

Mbuthu, who suffered a broken arm and injuries to her legs, said the car was a write off.

Mavuso sustained physical bruises and his heart was affected.

"The driver told me that he saw an object in front of him and he was trying to avoid it when the car rolled," said Mavuso

"I am lucky to be alive after my heart sustained bruises. Doctors told me that many people who suffered such injuries do not survive. I am in pain but I thank God I am alive."

The driver had only minor bruises.