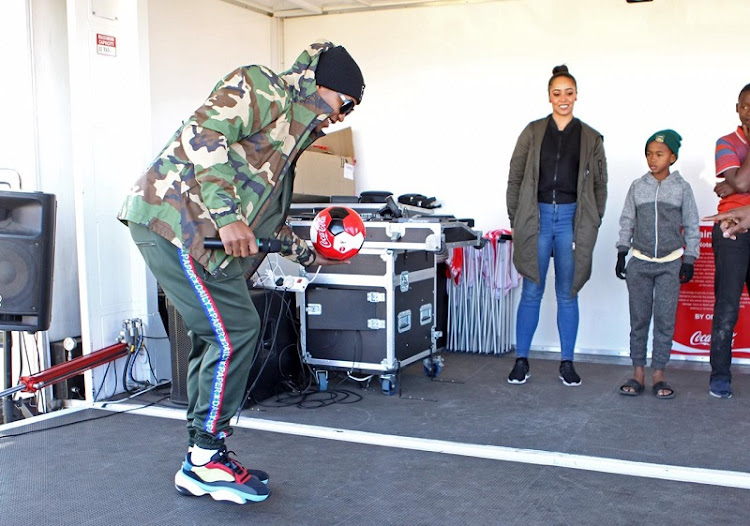 The hit maker said he was honoured to be a part of aiding youngsters as they chase their dreams.
Image: Supplied

The collision of music and football has never failed to strike the right chord with South Africans.

Think Shakira and Freshly Ground's Waka Waka, Queen's 'We are the Champions'  or the unmistakable strings of the Uefa Champions League anthem.

Not to be outdone by these soundtracks to the football's experience, DJ Speedsta has teamed up with the COPA Coca-Cola movement, a global school talent search tournament. And they are on the lookout for the competition’s anthem for 2019.

The “Mayo” hitmaker will be travelling across the width and breadth of South Africa and to each venue where the tournament is taking place, where he will be inviting teenagers onto the stage to sing and rap.

The best performers will have their voices separately recorded and added onto the final version of the anthem. This version will be available for download on all official Coca-Cola digital platforms.

This concept was successfully introduced last year, when the popular DJ Fresh headlined it.

The hit maker, who recently came out to warn against the perils of excessive alcohol consumption,  said he was honoured to be a part of aiding youngsters as they chase their dreams.

“This is a unique and exciting opportunity for me to work with one of the most reputable brands in the world. After carefully studying the nature and magnitude of the COPA Coca-Cola tournament, we saw it fit that we produce an equally fitting anthem. The song is about instilling a sense of self-belief and confidence in teenagers, encouraging them to dream and see themselves as champions” said Speedsta.

While Speedsta takes care of the musical part,  former Orlando Pirates captain Lucky Lekgwathi, who has been appointed as the competition’s ambassador, will be looking to give the youngsters the same opportunity he was given when his talent was identified while playing at school.

Teenagers interested in making their contribution to this year’s COPA Coca-Cola anthem are invited to make their way to the upcoming COPA Coca-Cola Provincial Finals.

He also said that he wasn't going to phone Speedsta to iron things out.
Shwashwi
3 years ago

Scoop Makhathini on Emtee's Ambitiouz situation: Somebody has to take the L