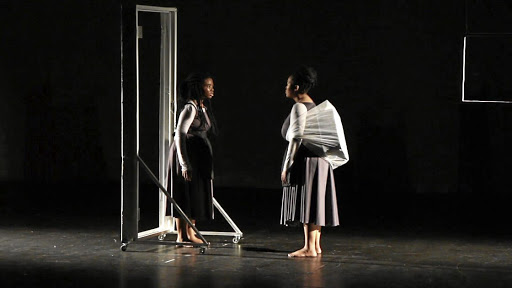 Actors telling a story in the play Igama? that opens at the South African State Theatre in Pretoria next week.

The play is currently on at Kopanong Arts Festival at the University of Pretoria. It is also set to open at the South African State Theatre in Pretoria as part of Vavasadi International Festival on August 3-4.

The five women intersect their stories inside a boxed community and how they are seen through the eyes of their oppressor.

Mthembu, an actor and singer who is also a master's student in theatre at Wits University, tries to move theatre-goers away from the normal chronological way of telling a story by adding a bit of abstract. She says the idea for Igama? started when she began with her research paper which focuses on black women playwright's plays, and how they use a nonlinear narrative to reflect the black women's lived experience.

Igama? seeks to paint women's experiences in different worlds, whether it is a corporate, politics or in the community.

"I am trying to break out of the frame by re-identifying who they are. It looks at how these women conform in the boxed frame - or do they rebel out?"

The play looks at themes such as identity, sexual violence, abuse, child rape, marriage, culture, and white supremacy. The use of disrupted theatrical time and space simultaneously highlights why a black woman's lived experience is not linear.

The 26-year-old explains that Igama? maps out the concept of intersectionality (gender, race, and class) and how systems of discrimination erode their experiences.

"I use the theory of intersectionality as a framework to explain the ways that systems of power such as white supremacist beliefs, post-colonial implication, and the politics of language erode the experiences of women through a perpetual and systematic oppression.

"Thus the themes that are explored within the play experiment with fragmented memories of black women, which move backward and forward."

"The show starts with actors speaking African languages and the move to English to show the past and the present."

Mthembu developed an interest in drama at high school. She completed her BTech in musical theatre at Tshwane University of Technology in 2015. Her play Milked Voice, which she wrote and directed, won the Standard Bank Ovation Award at the National Arts Festival in 2016.