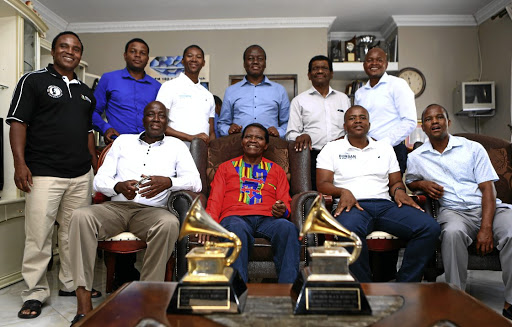 Founder of Ladysmith Black Mambazo Joseph Shabalala with other members of the group.
Image: Supplied

As a herdboy growing up on a farm in Ladysmith, KwaZulu-Natal, Joseph Shabalala's father would tell him that one day he would be educated, make his family proud, and fly in the planes that often soared over their home.

Mlwane Shabalala promised that when the boy fulfilled his prophecy, he would write down in a book every time he saw a plane his son was flying in.

Joseph went on to start the Ladysmith Black Mambazo music group, but his father never got to see the fulfilment of his prophecy. Mlwane died in the mid-1950s when his son was a teenager.

Now Joseph's life - from its humble beginnings to touring with US superstar Paul Simon and winning several Grammys - will be told in a musical that is set to tour SA from September.

The show, Mshengu: The Musical, is part of the Soweto Theatre's legacy project and is directed by actor Desmond Dube.

The life and times of scathamiya legend Joseph Shabalala will the told through a musical to be staged at the Soweto Theatre in September.
Entertainment
3 years ago

Joseph, 78, handed over leadership of Ladysmith Black Mambazo to his son Sibongiseni Shabalala five years ago. Joseph's ailing health meant he could no longer travel.

Sibongiseni, his brothers Thamsanqa, Msizi and Thulani Shabalala, and the group's oldest member, Alfred Mazibuko, are still part of Ladysmith Black Mambazo and contributed to the musical, meeting producers to share stories of Joseph's life.

Sibongiseni said his father was honoured by the production.

"My father's only goal in life was to share his love of isicathamiya [a traditional Zulu style of harmony-driven singing and dancing] with the world. He told us to be true to who we are and we have never been allowed to forget it.

"He had to work from a young age to make sure his family could afford to stay on the farm they were on, so he didn't get the education he wanted at the time. Still, he was told by his father that he would be educated one day and look how he has educated the world through his music."

Ladysmith Black Mambazo came to worldwide attention when Simon enlisted the group for his 1986 album Graceland, a landmark work of world music that won a Grammy for album of the year.

Sibongiseni said Simon had played an important role in the group's success and would also be honoured in the musical.

The production will form part of a larger "60-plus years of Ladysmith Black Mambazo" celebration that will also include concerts and other pieces in tribute to the group.

Nomsa Mazwai, the Soweto Theatre's general manager, said: "Ladysmith Black Mambazo have had such a rich and illustrious international career and their story is well known, but now we will be looking at the life of its founder, Joseph Shabalala. We want to make sure that his legacy is immortalised, and we will do that through theatre."

Dube said he was honoured to tell the story of a "giant, while he is still among us. Joseph's passion has fed his entire family and fuelled the fire of South African art."

Multi Grammy award-winning Ladysmith Black Mambazo founder Joseph Shabalala has fulfilled his longtime dream for the isicathamiya music to be ...
Entertainment
3 years ago

President Cyril Ramaphosa on Saturday paid a courtesy visit to the home of the founder of the multi Grammy Award-winning Isicathamiya group Ladysmith ...
News
3 years ago
Next Article