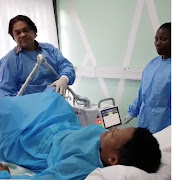 SA social media users were again exposed to the world of beauty treatments for the nether region when controversial media personality Zodwa Wabantu let them in on a glimpse into the world of vaginal aesthetic surgery.

Wabantu recently filmed and posted on social media a video of herself undergoing vaginal rejuvenation and a breast augmentation.

"You know, doc, as women, after giving birth we often feel that something down there is no longer the same or tight. I'm not talking for all women, but we've seen questions from women who are like, 'my vagina is no longer tight after birth or I was born like that'," she is heard saying in the video.

Her reasons for doing so were that she wanted her vagina to go back to pre-birth state, a lament many women have.

While Zodwa does not fully explain the procedure she has undergone, we spoke to a few experts about the different procedures available and what they involve.

According to Dr Portia Gumede, a medical aesthetics professional, women’s motives are not only to tighten the vagina for pleasure but the need arises from the aftereffects of birth and ageing.

“Women find it very interesting that some of the treatments that are done can actually help with urinary incontinence which you can get after childbirth. It’s not always immediate, it can happen later on in life, maybe in their 50s or 60s. But by doing the treatment it helps to prevent the recurrence of that later in life.”

She offers a vaginal rejuvenation treatment called carboxytherapy, among others, which she says is one of the least invasive, non-surgical treatments.

“We inject a little bit of carbon dioxide into the walls of the vagina and even on the outside as well, on the clitoris. And what happens is because carbon dioxide is not normal in your body, the body wants to get rid of it, so what it does is more blood vessels form and they go into that area, bringing in more oxygen, more nutrients to that area that helps to build up collagen. It’s a way of building up the barrier which will be in the vaginal wall.”

Specialist obstetrician and gynaecologist Dr Josh Matambo, who runs a private practice and administers such treatments, offers the FemiLift, which also treats common feminine issues such as vaginal laxity, dryness and recurring infections. He says he sees women from the ages of 35-60 as frequently as three times a week in his practice.

During the procedure, a hygiene probe with a laser light at the end of it is inserted into the vagina and it targets the designated area. The treatment normally lasts 30 minutes and no pain medication is required. Some people may experience a slight discomfort.

Both doctors urge that women go to practitioners who are trained, qualified and accredited because if you don’t you can experience complications from treatments. Patients should do their research and should follow all post-procedure care instructions if there are any, and also asses their own health before engaging in any procedures.