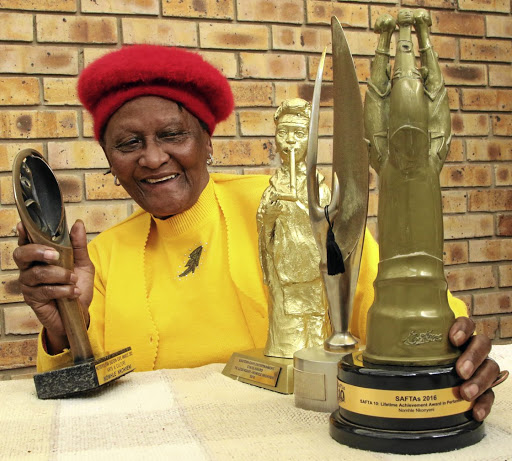 Actress Nomhle Nkonyeni with some of the awards she won during her acting career.
Image: Fredlin Adriaan

Veteran actress Nomhle Nkonyeni loved her work so much she wanted to "die working". Despite her ill health, she insisted on being booked to fly from Port Elizabeth to Johannesburg tomorrow to shoot her scenes in local soapie Scandal!.

Nkonyeni died in hospital at the age of 77 yesterday morning after she was admitted last week Friday.

Speaking to Sowetan yesterday, Scandal! creative producer Grace Mahlaba and supervising producer Ilse van Hemert said they were shocked by her death. "She was hiding her health issues from us. As an actress she just wanted to work. Even if she wasn't feeling well she would never tell us and she will just say 'I'm ready to work'," Van Hemert said.

Mahlaba said: "She said it more than once that, 'I do not want to fade away, I want to die working'. That was her.

"The production assistants came to me because they were scared of her because she would shout at you at any moment. They asked me to check if she was OK to still fly here. This was just yesterday [Tuesday]. They eventually spoke to her and she was excited. She was very stubborn."

Her family said they were struggling to come to terms with her death.

"Sis Hlehle, as she was affectionately called by everyone, was admitted at Livingstone Hospital on Friday, the 5th of July 2019, fought a good fight and unfortunately passed away," said family spokesperson Vusikhaya Mancapha. "Further details with regards to funeral arrangements will be announced after consultations within the entire Nkonyeni family have taken place."

One of her final roles was playing no-nonsense matriarch Lulama Langa in the e.tv show. Having been off-screen for a while, she was expected to start shooting with the show again on Monday. But now writers are re-writing the script. "We were anticipating seeing her coming to shift for yet another storyline for us. As we speak, we are rewriting a lot of scenes not to erase her, but to still have her voice even though she is gone," Mahlaba said.

Her appearance was pivotal to a storyline involving a special occasion for the Langa family. The new plan is to have her character send a family member on her behalf to attend the occasion and wreak havoc.

For her first theatre play as a director, Van Hemert worked with Nkonyeni as the lead in Not to Die Today. They have worked closely for over 12 years, doing about five plays a year. "I cannot remember one day where one negative thing happened with her in a working environment. 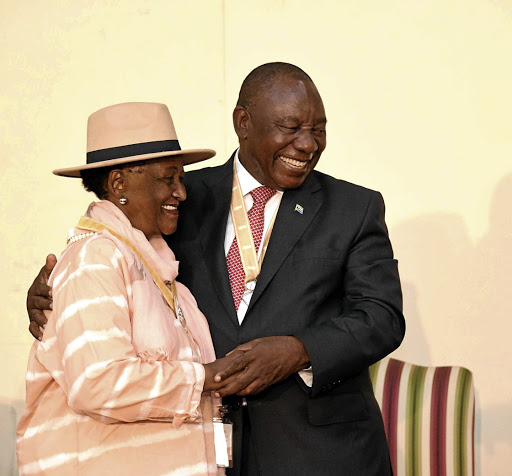 "She was just a blessing for every production she came to. She was prepared to do anything, except put on makeup because she said her skin was sensitive," Van Hemert said.

Actress Lusanda Mbane, who played her daughter-in-law Boniswa Langa in Scandal!, was supposed to share the new scenes with her. "I started getting flashbacks of the scenes we had done together, most of the time we were just waiting to laugh with everything that came out of her mouth. That's the kind of energy she added," Mbane said.

"We always knew that with her scenes she will add a special dimension that will make her trend on social media."

Nkonyeni was also part of the ensemble cast of Mzansi Magic drama Igazi, starring alongside Jet Novuka, Anga Makubalo, Zikhona Sodlaka and Vatiswa Ndara, among others. "I hope she can be remembered as a brave woman, as difficult as it was in this industry, who never stopped. She was funny, alive, unapologetic and vibrant on set. She was a mother," Sodlaka said.

She has also starred recently in filmmaker Jahmil X.T. Qubeka's two newest films - Sew the Winter to My Skin and Knuckle City. Her other memorable roles were in TV shows Gaz'lam, Zero Tolerance, Tsha- Tsha and Home Affairs.

In April, Nkonyeni was awarded the prestigious honour of the Order of Ikhamanga in Silver by President Cyril Ramaphosa for excellence in the fields of arts, culture, literature, music, journalism or sport.

"Though we mourn this loss, we have no doubt in our hearts that she fulfilled this dream and her legacy will live on forever," Mthethwa said. 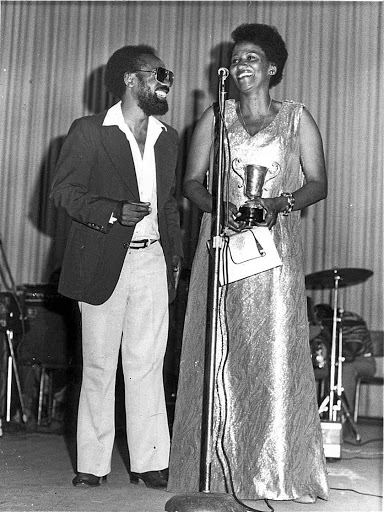 Nomhle NkonyenI after she was voted Actress of the Year in 1981.
Image: The Herald

Over her illustrious career, Nkonyeni became a household name for appearing in popular SABC shows such as Generations, Gaz'lam, Home Affairs, Society, Tsha-Tsha and Zero Tolerance.

"Ms Nkonyeni has been instrumental and played a leading role in shaping the arts and culture industry in South Africa, and her contribution was recognised when she received the Order of Ikhamanga in Silver from the president of South Africa, among other accolades," SABC spokesperson Vuyo Mthembu said.

"Mzansi Magic would like to pay tribute to the multi-awarded legendary actress Ma Nomhle Nkonyeni. She has contributed tremendously to the industry with her work being recognised worldwide," said head of publicity, local entertainment channels at Mzansi Magic, Philly Khubeka.

"Her exceptional acting talent and professionalism will be missed."