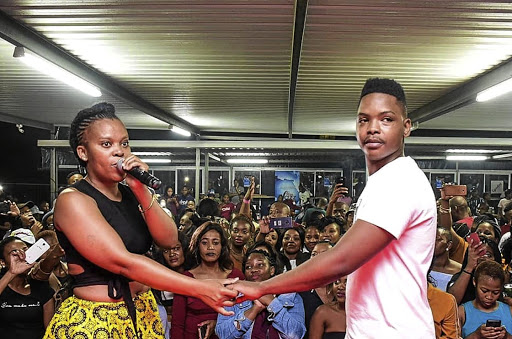 Cultural experts have blasted Zodwa Wabantu's move to pay lobolo for her boyfriend.

This comes after her family paid lobolo to Ntobeko Linda's family and it was flighted on MojaLove.

The socialite sent an all-woman delegation to ask for Linda's hand in marriage and they were charged R70,000. The delegation paid R40,000.

Zodwa had already paid R50,000 for Linda's ring. Though there were doubts if the wedding will continue, Zodwa has confirmed that it is on.

Dr Nomagugu Ngobese, the founder of Nomkhubulwane Culture and Youth Development Organisation, said paying lobolo for a man does not exist in the African culture.

Ngobese said she was aware that people believed that culture changes but she believed it was static. She argued that the issue of lobolo was used in many cases as a money-making scheme.

But Zodwa says he should stay out of it.
Entertainment
2 years ago

"These days negotiations have been associated with greed from families who ask for exorbitant lobolo prices.

"According to the African culture, people paid what they could afford. Lobolo does not mean buying the bride.

"But it's the husband showing how much he values his soon-to-be wife and the family that raised her."

He concurred that what she had done was a new phenomenon.

"According to my knowledge, it has never happened. But I'm sure she is doing it to create history. In years to come, people will speak about it that a woman paid lobolo for a man."

President of the African Cultural Heritage Trust Qhuzulini Sithole defined the act as taboo. He said paying lobolo for a man was "unAfrican".

"What this woman is doing will upset her ancestors. I would like to know if the boyfriend will assume her surname or not.

"If that is a case, this is a disaster. African weddings are rooted deeply into the culture. That would not work for a man."

Sithole said that after lobolo negotiations have been completed, the bride's family normally slaughtered a goat to make the ancestors aware that she was getting married.

The relationships or marriages involving younger men, or Ben 10s, to do not work.
Opinion
2 years ago

He said the same happened when the bride arrives at the groom's family.

"The groom's family will slaughter a goat to welcome the new member to the family. An inyongo [bile] is used. This signifies that the bride officially belongs there. How are they going to perform that process?

"This will cause a huge problem for this boy. He will be regarded as failure by his peers."

However, Zodwa said whether paying lobolo for her boyfriend was unAfrican or not, she did not care.

She said she did not follow any African culture and was living by her own rules.

"I don't follow any rules. I do what I want. Whether people are not happy or criticising me, I'm going ahead with the wedding.

"I don't have a problem with those who are practising it. I only pray, and the rest they are my rules."