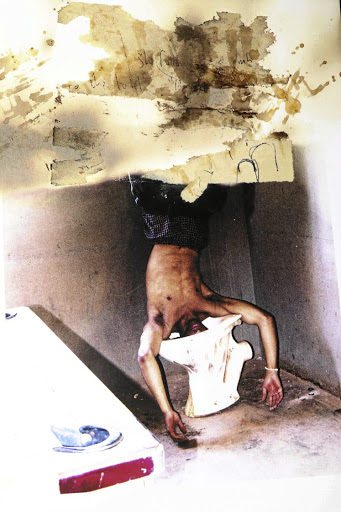 Young lensman Thembinkosi Hlatshwayo has received an international accolade for his striking photos.

Hlatshwayo, who was born in Lawley near Ennerdale, south of Johannesburg, scooped the CAP Prize for Contemporary African Photography 2019. The winners were announced last week at the Photo Basel international Art Fair in Switzerland.

His works were selected by an international panel of 19 judges.

Hlatshwayo says: "I am excited about the win. I did expect to be shortlisted, but not the win. I am happy that winning this competition will launch my name in the international space and get a chance to exhibit internationally."

Titled Slaaghuis, Hlatshwayo says the idea of the concept has been on his mind for years and he decided to explore it last year.

He uses the medium of photographic collage to encapsulate the shabby, he captures the torn, the violence and the hopelessness.

The result is a series of visual spotlights on the autobiography of an individual on the verge of extinction.

Born in 1993, the energy that the series of works unlocks makes way for innovations.

He says Slaaghuis conjures up images of a slaughterhouse or, in a broader sense, a massacre, which makes it clear that there is no room for hopes and dreams in that space.

"I lived in a box room in a dosshouse, where nothing human was hidden from him, and where the violence and schizophrenia of society crashed in daily like waves. I wanted nothing, but to flee. I felt that even my thoughts were damaged, injured and raped."

Hlatshwayo's sense of shame and despair regarding the space in which he grew up has given rise to anger and rage.

"My room is a mess. I can't keep it tidy. I don't try hard enough. I am ashamed. I am accountable. I am afraid. I am angry. I want out. I want to get bloody violent. I have a fear of being an adult with a really messed up room. Something is not quite appealing in that."

Hlatshwayo explains that growing up in a home with a tavern confronted him with realities that made him want to escape the space. He says through the series he has confronted the unresolved issues he has with the tavern.

The young artists says he further confront his violated or perhaps traumatised mind as well as memory.

"A refugee camp or safe haven should have been my home, but it couldn't be because it was the extension of the tavern."

Although he has photographed people living with the skin condition for close to a decade, the lensman feels there is still more to be done
S Mag
2 years ago

Vije Vijendranath is the creative force behind photography website Tapsnapp.
SebenzaLIVE
2 years ago
Next Article