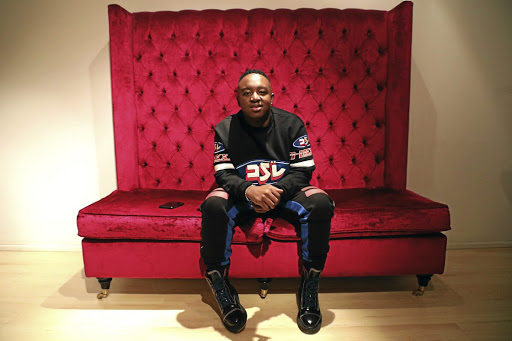 Shimza says he is also on a journey to discard his mkhaba . / Thulani Mbele

DJing in freezing sub-zero weather conditions is not as easy as licking ice cream and Shimza can attest to that.

But the 30-year-old DJ, real name Ashley Raphala, makes it look breezy during his hour-long set at Pop Bottles Lesotho. It is just after 6pm and it's the dead of winter at the snowy Afriski Mountain Resort.

The rugged skiing resort - situated 3,050m above sea level in the heart of the Maluti Mountains - was the venue for the second Pop Bottles out of SA, after balmy Mauritius two years ago. Mzansi stars such as Natasha Thahane, Sjava and Lunga Shabalala have travelled to the wonderland to attend the three-day lifestyle and music festival founded by DJ Dimplez.

"It was super-cold during my set and my fingers were freezing because I can't use gloves when I'm working," Shimza says. "As a result, I made a bit of mistakes here and there because of how my fingers were feeling. I love this place. I didn't think it will be like this..."

Shimza is jotting down tips as he's getting ready to hold the fifth anniversary of his One Man Show in Soweto. It follows in the success of the long-running Tembisa version held annually on Christmas Day.

No one is immune to the crime in our country, says DJ Shimza

DJ Shimza thinks crime is out of control and it has nothing to do with social media.
Entertainment
2 years ago

Taking place on June 29 at Zone 6 Venue in Diepkloof, it features a hot line-up of Kwesta, Riky Rick, Cassper Nyovest and AKA.

"What Pop Bottles is doing is dope and with the concept, they are trying so hard to make it innovative. I feel like with Zone 6, I've overdone it, I can't sell it out more than I have sold it out already. I have always sold out the place and it's getting boring. I need to think of something else, maybe move it to Nasrec."

Shimza is a brand-new man after losing a ton of weight. He went from flab to fab in what seems like overnight, but it has almost been a year since he secretly started his weight-loss journey. "I'm not a brand-new man yet. I just want to look good. I want to finish my mkhaba."

Shimza has been putting in the work!
Eye Candy
2 years ago

Shimza doesn't know how much weight he has lost so far as he doesn't weigh himself. "I don't have a 9 to 5 [job], so you wake up in the morning and you laze around the house. So I decided to rather wake up and go to the gym. I didn't like how I looked. I was too fat. I just decided I wanted to transform my body and as I started to see the results I thought, 'maybe I might be a hunk'. I'm not targeting Cassper Nyovest's six-pack level."

Shimza credits the secret to his career success to always remaining patient.

"I'm staying true with who I am. I'm staying in my lane and I'm in no rush. I understand that things take time and need you to be patient. You need to say 'no' to some things," he says.

"As much as we would like government to create more jobs for the youth, I think it's even greater to instil entrepreneurship in young people."