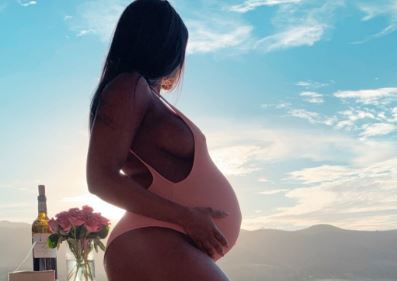 Actress Denise Zimba is counting the days until she gives birth to her first child and this week showed off her pregnant belly.

Sporting a pink swimsuit, Denise posed for a snap of her holding her tummy as she looked out onto a picturesque view and stunning sunset.

It was one of those snaps you make your profile picture and print it in your home to show  your friends how artsy you are.

Denise surprised many when she announced late last month that she was pregnant.

While congratulations flooded in for the Wedding Bashers star, she opened up about what a miracle it was after being told by doctors that she had 1% chance of falling pregnant.

"My doctor said I had endometriosis. An urgent treatment was needed, which meant falling pregnant was indefinitely placed on the back burner. Only 1% possibility to conceive, even after treatment for some time.

"I was shocked, and felt less of a woman. I was not eager to fall pregnant, but it has always been important to me to have a family one day.

"I thought, 'Wow!' I didn't realise that falling pregnant could be quite a difficult and physically painful experience. It became clear that breaking away from work and focusing on my family - the 'here and now' that was incredibly fruitful and exciting - needed my entire focus."

Denise Zimba has joined the worldwide choir of peeps confused by claims that Kylie Jenner is on the road to being a self-made billionaire.
Lifestyle
3 years ago

Pearl asked Denise what was behind her reason for saying such things about Ayanda.
Shwashwi
4 years ago
Next Article