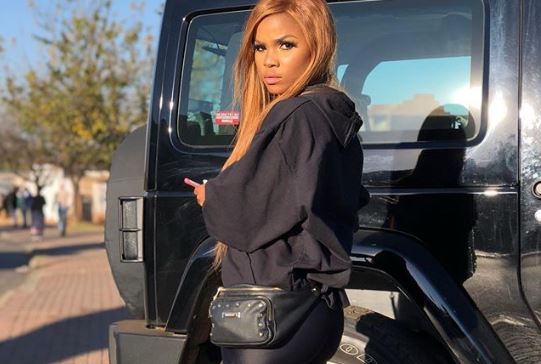 Khanya Mkangisa was arrested on allegations of drinking and driving three weeks ago.

Video footage of actress Khanya Mkangisa being arrested by Joburg metro police on drinking and driving allegations has gone viral on social media after originally being posted on Twitter on the 4th of May.

In the video, Mkangisa is seen with her hands behind her back, while she and a female officer can be heard having a heated verbal exchange.

According to a Sunday Sun report, Mkhangisa appeared in the Randburg Magistrates Court on Thursday 9 May on charges of common assault and driving under the influence of alcohol.

She was released on R1 500 bail and ordered reappear in the same court early next month.

Mkangisa's attorney, Idemudia Uriesi of PI Uriesi Attorneys, confirmed to TshisaLive that the video is real and that the actress was arrested on suspicion of drinking and driving three weeks ago.

"I do not see her doing anything wrong in the video, other than standing up for herself. People should give the process a chance and remember that at this stage it is just an allegation."

Several attempts by TshisaLIVE to get comment from metro police by the time of publishing were unsuccessful.

Khanya Mkangisa ?? I didn’t know she’s this rude bathong. Anyway we lose our loved ones in car accidents due to people who drink and drive. This must really stop ? pic.twitter.com/1shs4SSqUM

This is not the first time that Mkangisa has landed on the wrong side of the law. In February, Sunday World reported that Mkangisa spent the night behind bars after an alleged hit-and-run incident.

According to the report, Mkangisa tried to vanish from the scene but she became bewildered noticing that the cops were giving chase. After her arrest, she spent the Sunday night behind bars and was released on Monday after she had appeared in the Randburg magistrate's court.

However, the 30-year-old actress denied the allegations against her, saying "the story is completely false". During an interview on Metro FM at the time, Khanya confirmed she was taken into custody but claimed the situation was "blown out of proportion".

"I don't want to get into it but, basically, I was definitely not involved in a hit-and-run. I don't know how this story blew way out of proportion."

At the time, police spokesperson Lungelo Dlamini confirmed that a case of hit-and-run as a result of an accident was opened against Mkangisa in Randburg.