Fergusons crack the whip on Mashigo 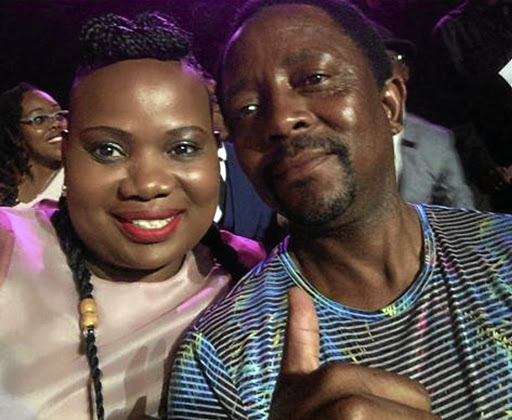 Peter Mashigo with his partner Ndundu Sithole, who he was filmed assaulting in a video clip.

Peter Mashigo has been hauled before a disciplinary hearing by Ferguson Films.

This follows a video clip that emerged showing The Throne actor assaulting his lover Ndundu Sithole in the streets of Pretoria.

Mashigo confirmed that he will meet with producers Connie and Shona Ferguson today to decide his fate on the Mzansi Magic telenovela.

"Whatever my fate is I will accept it. I reiterate once again that my behaviour was not OK. I'm not a violent person," Mashigo told Sowetan yesterday.

A remorseful Mashigo also apologised to Sithole for accusing her of being a "wild and violent" person who would slap him when he came home late at night, as reported in the Friday edition of Sowetan.

"I want to apologise to Ndundu about what I said, especially the stuff about her slapping me. She is a good woman and that has never happened," Mashigo said.

"Sometimes when a person talks in anger a lot of things are said."

The Throne actor Peter Mashigo's flame Ndundu Sithole says she has been left feeling hopeless and helpless after she was "beaten up and choked" by ...
Entertainment
2 years ago

Sithole, an SABC news editor, said they met on Sunday, where she demanded an apology.

"Yesterday, we met and he came to fetch his clothes. He has been coming in and out of the house, so on Sunday I set him free," Sithole said.

"He was apologising and I told him he must come clean and rectify everything that he said [about me].

"I told him that 'what you put out there, it's damaging my reputation'. He's making me look like I'm a bitter girlfriend who was chasing after him, which is not true.

"I also asked for him to set up a meeting with my family to apologise. My mother is livid," she added.

Mashigo's 22-year-old daughter Zinhle, who lived with the couple during their year-long relationship, said she had never witnessed a fight between the two before.

"They have never been in a fight in the house. They loved one another and I have never seen them fight," Zinhle said.

The story of Yolanda Dlepu is heartbreaking. Normally, when domestic abuse turns fatal the blame game begins.
Opinion
2 years ago

"I have a mother-daughter relationship with Ndundu."

Last week, Sithole told Sowetan that she has been left feeling hopeless and helpless after she was "beaten up and choked" by Mashigo on the street in Arcadia, Pretoria.

Sithole added that the fight was triggered after she caught Mashigo cheating with a young student.

Mzansi Magic's head of department for publicity and public relations Philly Kubheka said: "Mzansi Magic is aware of the footage circulating on social media regarding Peter Mashigo, an actor on The Throne.

"The channel does not condone any form of violence, particularly against women and condemns any abusive behaviour.

"This matter is currently being dealt with internally between the channel, Mashigo and the production company. The outcomes of these processes will be communicated in due course."