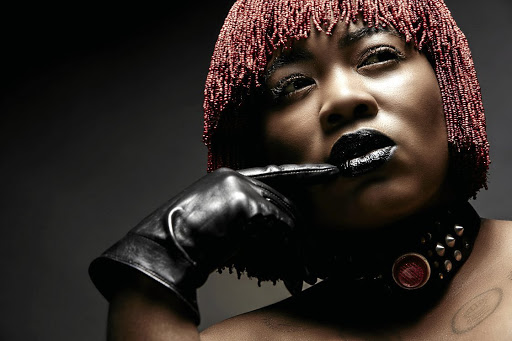 Pop culture innovator Thandiswa Mazwai doesn't kiss and tell when it comes to her fetish.

She would rather show you on stage at her much-anticipated Fetish music show on Friday night. Taking place at the Newtown Music Factory in Johannesburg's inner city, Mazwai encourages those keen to attend to dress according to their fetish.

"You almost got me, but you didn't," Mazwai said with huge laughter when Sowetan asked her to share her fetish.

"Guys, just come to the show and you will see."

But she was more forthcoming about what she planned on wearing. Taking Sowetan through her bondage-inspired wardrobe, she didn't hold back: "I don't know yet what I'm wearing, I'm still running through my wardrobe on what I can put together," she teased.

"I can also interpret fetish with an African twist, where you can put on waist beads with a mini-skirt, to me that's so sexy. Beads can be sexy; I have a lot of beads.

"I also have a lot of harnesses because I have been wearing this stuff for years. I have harnesses for my chest and I have corsets. I have gloves. I have lots of leather. I have stuff. I have the kinds of stuff to express this kind of sexual freedom."

Audience eats out of singer's hand.
Lifestyle
3 years ago

The concert will be supported by new talent such as FAKA, DJ Doowap and Lady Skollie. Obsessed with themed parties, Mazwai plans to have a series of similiar concerts in the future.

"There are two definitions of fetish. One of them is an obsession with something. Obviously I'm obsessed with music and trying out new things," she explained.

"Another definition is an object - if you practise the voodoo faith - that is believed to have spiritual power.

"As a musician, there are some objects that I can't perform without. For instance, I have a stick that I carry on stage or a pair of sneakers. There is a next kind of layer to that in looking at the idea of sexuality and sexual identity.

"Throwing it at people and seeing if South Africans are ready to accept other people's choices and expressing themselves. It's about freedom and expression."

Through the concert she is also educating people about gender-based violence, homophobia and transphobia.

"The reason that we have problems with violence against the gay community and women is because people don't speak about sexuality. They end up not talking about this thing called consent.

"We are trying to educate people that even if you come on the night and someone decides that they are going to have their breasts out, those breasts are still not yours."

"I'm looking forward to starting a new community of people. I have been going to New York for many years, but there is a community that I'm trying to establish that is alternative black, rebellious and conscious."