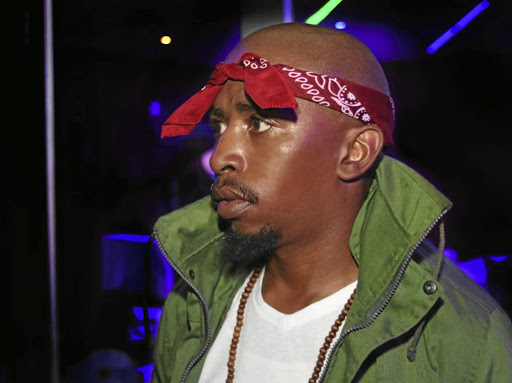 Kadaf is milking his uncanny resemblance to the late US rap icon Tupac Shakur for all it's worth.

But he has his own music legacy to be proud of. His father was a saxophonist for the iconic Soul Brothers.

"My father influenced me so much and in so many ways because I used to tour with the group around the country... if you listen to my music, it's very mature and diverse."

Born Mbongeni Magubane in Phiri, Soweto, he got the name Kadaf from a friend who commented that when he rapped he sounded like Kadaf from the group Outlaws that featured Tupac.

Kadaf is carving a career for himself in kwaito, which he says had a big impact on him. He says he fell in love with kwaito because it expressed the lifestyle and difficulties that young people in SA faced.

His new album, Royalty901, features 15 tracks bursting with fresh sounds and live instruments. It's a potpourri of sounds that traverse genres such as house, gqom, soul, jazz and a sprinkle of hip-hop.

He has already released two music videos for the songs Vuma and Ibhasilomjolo.

He has also worked with Davic, JRoss aka Sgonondo, Elliker and Shado.

Looking over at my bright future like 🔥😅🧐…Happy Monday everyone, wishing you a productive week ahead 🙏🏽