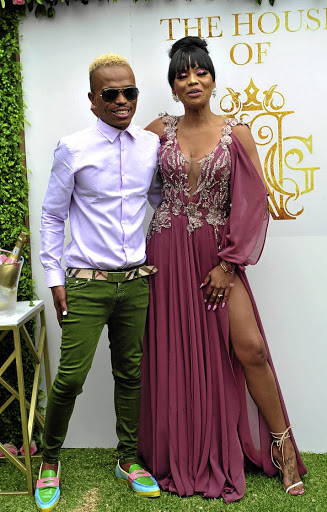 Frenemies Bonang Matheba and Somizi Mhlongo have kissed and made up and it was for "champagne darling".

The duo had cameras flashing yesterday at Waterfall Equestrian Estate as Queen B was announced as the first black woman to become a member of the Cap Classique Producers Association.

The association was founded in 1992 by producers who share a passion for bottle-fermented sparkling wines and to promote Mzansi's premium Méthode Cap Classique (MCC) wines. With the launch of her unique luxury Brut and Brut Rosé MCCs, House Of BNG, she joins the likes of Krone and JC Le Roux. It was created by Jeff Grier in Stellenbosch's Villiera Wines.

Looking like the belle of the ball in a Grecian-inspired Gert-Johan Coetzee dress, Matheba explained that the alcoholic brand has been in the works for two years.

"Of course, I can't make it in the champagne region of France, SA has the best MCCs in the world. It's made in the same champagne making style and so that's how it all started," she shared.

"This is my love letter to Africa. It took so long to create and it's proudly South African."

A-listers such as Boity Thulo, Khanyi Mbau, Maps Maponyane, K Naomi, Nadia Nakai and Jessica Nkosi, her parents and family including socialite cousin Tebogo "PinkyGirl" Mekgwe were there to support her.

"I want to say to anyone who is either in business, starting business or thinking of starting one that it doesn't come easy. You have to work on it, be tolerant, smart, passionate and sharp," said Zulu.

"Bonang, you are with it. I congratulate you for being the first black woman to be up there. we come from a history that excluded us from all these things.

"Therefore, we must celebrate the first because some people say we are fed up with 'the first'".

Matheba set to launch own wine.
Lifestyle
3 years ago

Queen B is doing the most overseas.
Pic of The Day
3 years ago
Next Article