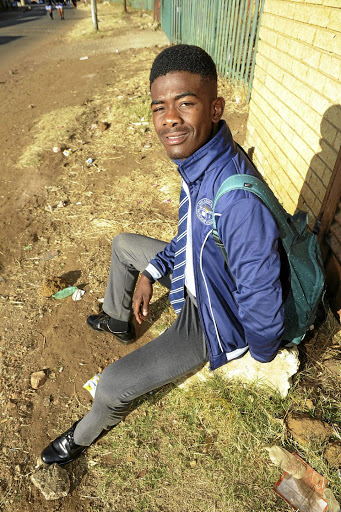 While in grade 11 2017, he hit it big after an amateur video clip of his now hit track Tholukuthi Hey! went viral, catching the attention of DJ Euphonik, and kicking off his music career.

"I'm very happy because many people thought I was going to fail, so I gave people something different to talk about," he excitedly told Sowetan yesterday.

"People may see me performing in a club or at a concert and they think all I do is party. But I knew what I wanted to achieve because school is very important to me.

"I had no choice but to pass, especially because everyone was watching me.

"I've always enjoyed school and I'm going to miss it, there was always a vibe there."

Hlatshwayo's secret approach to passing matric was, for starters, making sure that he was always a chapter ahead of everyone in his class, just in case his schedule got busy.

In preparation of his final exams he took a break completely from music in September.

"I want the matriculants of this year to know that if you put your mind to something, you can achieve it.

"Never mind what people say, people will always talk. Just concentrate on what you want," he advised.

This year Hlatshwayo plans to release his debut album. He also plans to take his education further by studying a course in media.

After the fuss over Tholukuthi Hey faded‚ people thought that Killer Kau would disappear.
Lifestyle
4 years ago

With the four syllable word Tholukuthi (You find that...) a 19-year-old schoolboy from Zondi, Soweto, has left the nation buzzing. He has ...
Entertainment
4 years ago
Next Article