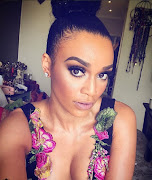 Actress Pearl Thusi announced via her social media platforms that she would star in Africa's very first Netflix original series.

A visibly emotional Thusi can be seen in a video thanking Netflix and the team that she has worked with during the announcement.

"I cannot wait for every young woman,  every woman on this continent, actually on this planet to meet Queen Sono, we've worked so hard on this."

Thusi will be playing the role of a spy at a South African Agency. According to IOL Entertainment, the show will be created comedian and filmmaker Kagiso Lediga as the director, and executive producer Tasmin Andersson.

Netflix announced earlier this month that they were looking for content from the continent.

#QueenSono - Africa’s first @netflix original ! A thrilling story about a kickass female spy. Can’t wait for you guys to see what we have in store for you ! @NetflixSA pic.twitter.com/z0LtRTbspv

“There’s going to come a time when half of the top 10 of most-watched shows in a given year are going to come from outside of the US,” Erik Barmack, Netflix's vice-president of international originals, Variety reports.

“I don’t think that’s very actually far away. I think that’s going to come in years, not decades,” Barmack added.

The company has recently launched some European content and even has a show for the Arabic-speaking market.