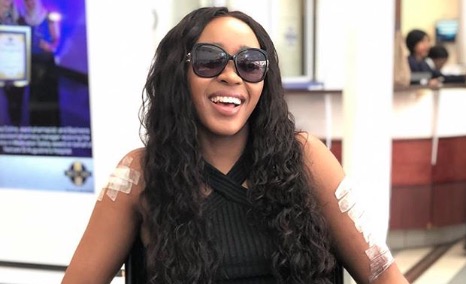 TV personality and fitness fundi Sbahle Mpisane is finally home after being released from hospital more than three months after being involved in a horror crash in Durban.

Sbahle was rushed to hospital after being rescued by the Jaws of Life in the early hours of August 9.

Her boyfriend, Itumeleng Khune, posted a picture of Sbahle in a wheelchair and said it was a "day of celebration" as she was released from hospital.

A day of celebration as Queeno @sbahle_mpisane leaves the Hospital ,Thank you all for your Prayers ,the Almighty heard you ? #GodIsGreat ?? #CavaTheSmile ? #FitnessBunnieIsBack ????

The Mpisane family has been mum on her condition after a video of Sbahle was posted on social media.

In the video, which was posted by her brother, a visibly weak Sbahle thanked fans for their support.

But the video was removed after the family said trolls had commented on the video.

In the image posted by Itu, bandages can still be seen on Sbahle's arms.

Itu has been a rock to his gal during this period, often posting pictures of her and calling her his queen.

A video of Sbahle Mpisane from her hospital bed‚ which showed her recovery has been removed by her family.
Entertainment
3 years ago

The TV star shared a cute video for her parent's anniversary from her hospital bed.
News
3 years ago

Those Sbahle Mpisane are overjoyed that she was strong enough to enjoy her first solid meal.
Entertainment
3 years ago

Her father Sbu is on a crusade to track down the car he claims pushed his daughter from the road.
News
3 years ago

As Sbahle Mpisane continues to fight the odds after being injured in a horror car crash a week ago.
Entertainment
3 years ago

Socialite and social media celebrity Sbahle Mpisane is fighting for her life in hospital.
Entertainment
3 years ago

Sbahle Mpisane is in a critical condition at a Durban hospital after being involved in a serious car crash.
Entertainment
3 years ago
Next Article