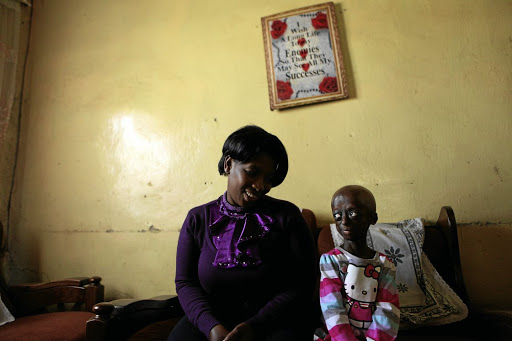 Bellah Phalatse with her daughter Ontlametse, who is being remembered in a school renaming and a documentary.
Image: Lauren Mulligan.

A school activation project in the North West that intended to honour the memory of the much-loved progeria sufferer Ontlametse Phalatse has turned into a nightmare for the family and its organisers.

The details are exposed in a letter Mokwena addressed to public service and administration minister Ayanda Dlodlo, begging her to intervene.

Mokwena laid bare the North West department of education and sport development's failure to honour their promise to fund the project.

So unpleasant is the situation that Mokwena declared that her five-year-old company is hanging by a thread as it faces bankruptcy. She also revealed that she was unable to pay her staff, suppliers and freelancers after the department failed to honour its deal.

"Worse, Prosperita Productions had been giving Ontlametse Phalatse's family financial support, and because we couldn't give them more, they think I am hogging money while profiting from their loss and daughter's story," she wrote.

The project that, according to Mokwena, was approved by the department in June 2017 entails the screening of documentary My Attractive Life to schools in the province. The company aimed to motivate pupils through the life of Phalatse, who died aged 18 last year after living with a rare genetic disorder called progeria.

Mokwena said she roped in corporate social investment sponsors like Edcon to provide school shoes and advertisers to build awareness. But delays from the department resulted in it not taking off the ground.

"Let me mention at this point that I was given a run-around that included meeting officials on the sidelines of community events, malls and BP garages as those who were responsible for signing the appointment letter led me to believe that they are very busy.

"The department has failed us greatly. They have stalled a much-needed plan to improve lives across the province," Mokwena wrote.

The story of Ontlametse Phalatse will be immortalised on celluloid when a new documentary film is released. Phalatse's is the story of a young woman ...
News
4 years ago

After being given the run-around in a meeting with education MEC Sello Lehari and education HOD Stephinah Semaswe, it was agreed that the activations will then take place in November 2017.

"With each postponement my company incurred debt because we kept roping in suppliers then putting plans on hold. I notified the department of this drawback," she said.

"When the department reopened in the first week of January 2018 we were paid a quarter of the entire budget and told that the project will happen in March 2018."

Sowetan has learnt that the only activation that took place was on April 26 in Tlhako-A-Thamaga Primary School in Hebron, North West - overall, four were planned across the province.

According to a source, the department had urged Mokwena to cancel the night before, but she refused and the documentary was screened. "They brought someone from the district and said no one from the head office will be there," Sowetan was told.

Department spokesperson Freddy Sepeng said over the phone: "Kea said she spoke to you and she took care of it, so I thought there was no need to reply anymore. Please give me an hour to reply."

Zuma mixes politics with the personal at Ontlametse Phalatse’s funeral

President Jacob Zuma on Friday recalled his meeting with Ontlametse Phalatse as he paid tribute to the progeria sufferer as an “articulate and ...
News
4 years ago

He later sent an SMS: "As the department we were not aware of the allegations but we are investigating."

Mokwena confirmed that she wrote the letter and that the department has been giving her the run-around for over a year.

"Yes, I have been in constant contact with the department since March 2017, met countless of times with office directors and HOD Mrs Semaswe and other key directors within the department," she said.

"The process has been a painful experience where I'm either snubbed, humiliated or taken for granted."