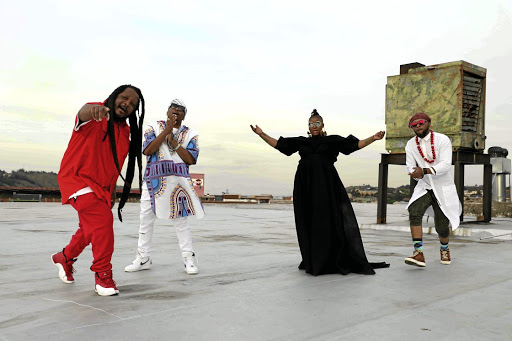 Bongo Maffin during a video shoot of their new single 'Harare' in Johannesburg. The Afro-pop group has recorded together for the first time in more than 10 years.
Image: Thulani Mbele

Frantic stylists dart in and out of the room with pieces of cloths, sunglasses and jewellery. A make-up artist meticulously gives Thandiswa Mazwai a lick of deep-blue lipstick. Speedy has to decide between the dashikis hanging in his room. Stoan is fiddling with a camera, while Jahseed holds court in the studio about this or that.

We are on the sixth floor of a building in Maboneng, Johannesburg, as the pre-eminent South African band Bongo Maffin puts finishing touches to their much-awaited return.

Their new song Harare, which will be released today, blasts through the speakers as they go against the green wall to record the video.

Harare bursts with energy and carries an unmistakable Afro-beat influence.

It doesn't stray away from their signature sound, in fact the Bongo DNA is imprinted in the track and harks back to the heady days of Kura Uone and Bongolution.

They explain that "harare" translates to ha ba robale in Sotho or they don't sleep in English. There is excitement in the air as they fly the flag on the rooftop on a nippy and windy Joburg afternoon.

There is a race against sunset as Thandiswa waits for her tights to be ubered to the venue. They finally arrive and the show gets on the road.

"I can't believe I'm back with these guys. It's been a long friendship and getting back was easy. What we recorded was light-hearted, which is different to my work which takes more from me because it's usually heavier.

"Making music with them is less strenuous because there is always someone to fill up the gap in a song."

While she focuses on the success of Harare, Thandiswa says she still has time to do her solo projects. "I'm polyamorous," she laughs. "I'm writing and working on my own show, Letter to Azania, at the end of November at Lyric Theatre."

She says Harare shows how there's a seamless engagement with other African countries. "It's a reminder that these borders were made by whites to separate us. Ours is a unifying message and a celebration of African cities that don't sleep.

"We are always told about New York, the city that doesn't sleep but our cities don't sleep too... Africans working hard and partying too."

Speedy celebrates his return to the studio with the band, 18 years later. He says there was never any bad blood between them. "I was the nagging one since we started performing together in 2014. There was a gap in the industry and the group was missed. Mafikizolo held it down and it was cool."

Vele vele...what did Bongo Maffin say we must do with that S'ghubu?

Most of us have been singing: Us'fake ezozweni". Only to find out that the lyrics may be: as far as you can".
Lifestyle
4 years ago

Speedy says he found that he was misunderstood. "People mistake my passion for arrogance. I'm such a loner, I'm private and want my space."

He says Harare is their stance against xenophobia.

For Stoan, this is the reconstruction of the institution. A band that stands tall on the music landscape and a towering figure in local music. He describes Harare as a metaphor to the life of an artist that doesn't sleep. "It's our journey back to Afro-futurism vibe as we connect our roots and the future."

The host of Afro Cafe for the last 10 years, he says the album will be an honest reflection of the influences of music on them as individuals.

Jahseed is grateful for the journey of Bongo Maffin up to so far. "We are lucky to be here. It's a blessing that we are all here to see this day, so many soldiers have gone."

It may have been a year the music industry haemorrhaged the most with its brightest stars falling, and the return of Bongo Maffin is a tonic to set hearts at ease. Consider that this is their first studio release in 13 years, the first with Speedy in 18 years.