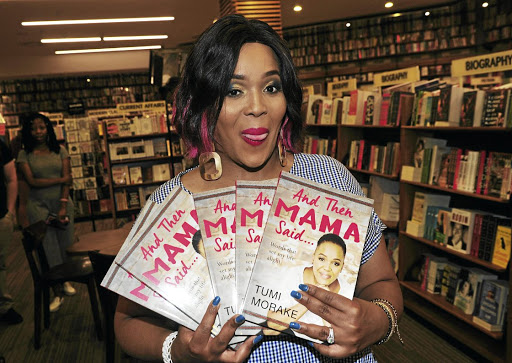 Tumi Morake during the official launch of her book, 'And Then Mama Said', in Johannesburg.
Image: Veli Nhlapo

The sisterhood bond between comedienne Tumi Morake and her equally hilarious TV/radio personality friend Anele Mdoda stole the show at the launch of Morake's book on Wednesday night.

The star-studded launch shindig was hosted by Mdoda and was attended by Morake's famous pals such as Rami Chuene, Dineo Moeketsi, Ndumiso Lindi and Joey Rasdien.

Morake's actor husband Mpho Osei-Tutu, currently leading the cast of the second season of Mzansi Magic's Sunday night drama The Imposter, was there by her side. The couple are the proud parents of three kids.

While Mdoda discussed Morake's colourful career, it was the discussion over her controversial exit from Jacaranda FM that drew the most attention.

During her short-lived stay on the radio station, co-hosting the breakfast show, Morake caused a stir for her apartheid analogy that ruffled the feathers of the white Afrikaans-speaking listeners. At the height of the controversy she was labelled "racist" by her critics.

Morake said her rock during the saga was her mother-in-law.

"I can't remember the contract I signed when I left so I'm not sure if I'm allowed to tell you, but let's risk it. I'm selling books, so I can afford a lawyer," she jokingly told those at the launch.

"My plan was that at the end of the contract I would leave. This was going to be after six months... Then it was like, 'either you are going or you are not going'. So, I was like, 'deuces' [goodbye]."

The book, titled And Then Mama Said, was released earlier this week. It offers readers a behind-the-scenes glimpse at Morake's career. She gets candid about her job at Jacaranda, car accident, the body shaming she endured on the set of Our Perfect Wedding and her tumultuous romance with her husband. It was inspired by Morake's mother, who she modelled her public persona after. She is described as having had a big and bold voice to say what many people were afraid to.