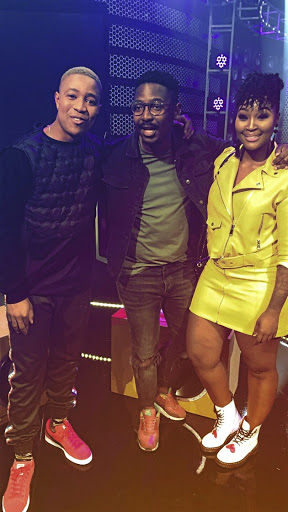 The future of hit TV show Live Amp that spearheaded the careers of Bonang Matheba and Minnie Dlamini hangs in the balance.

Sowetan can reveal that the reception over the new-look SABC1 music show with fresh-faced presenters DJ Speedsta and DJ Lamiez Holworthy has been so lukewarm that production company Urban Brew Studios is starting to feel the heat.

So stormy is the climate that Live Amp producer Nhlanhla Mthimkhulu was given the boot on Tuesday last week as part of the strategy to salvage what's left of the once top-rated TV show.

According to an insider at
Urban Brew Studios, Mthimkhulu was fired following a number of "technical glitches" that resulted in the show not going live on TV at one stage.

Sowetan understands that the most noticeable and embarrassing was on June 8, which was planned as DJ Warras's farewell episode. The episode failed to air; instead a repeat episode was shown and they had to apologise to viewers.

Mthimkhulu confirmed to Sowetan he was given his marching order last week. He admitted that the show had taken a ratings dip with the recent new look.

The 26-year-old blamed most of the countless "technical errors" to the move to a new studio. Urban Brew Studios moved to new premises in Randburg in April.

"We have had so many on-air technical glitches since we moved to our new premises. With that came a lot of dissatisfaction from the SABC with regards to the production.

"Over-time I suppose they were just fed up with us and they were like 'we need to change the entire team to sort of regain what the show was in previous years or whatever'.

Fresh off the runway and straight to the stage, real men wear skirts.
Entertainment
2 years ago

"The numbers had dropped, but the drop came straight after the show had been off air for a while. So, I guess people were still trying to get used to the new presenters. Every time a show of this magnitude gets new presenters people take long to warm up to it."

Live Amp lost its big prolific hosts Lerato Kganyago and DJ Warras earlier this year. The show went on a month-long hiatus between June and July for the duration of the soccer World Cup, returning with new presenters on July 20.

Mthimkhulu has previously worked as a producer on various shows on etv's youth entertainment programming Craz-e. He joined Live Amp as a producer in November. His one-year contract with the show was supposed to end this month.

He said given the current working climate at Urban Brew Studios, he felt that it was unfair for him to be let go, instead of looking at other ways to resolve the show's poor performance.

"I certainly don't think it was fair of them to let me go. The reasons that I was given for being let go were just not satisfactory to me. I have been doing a very good job in terms of content and turning the show around," he said.

SABC spokesperson Neo Momodu said: "The SABC does not employ staff for Live Amp. They are employed and/or engaged by the production house. We can therefore not comment on this matter."