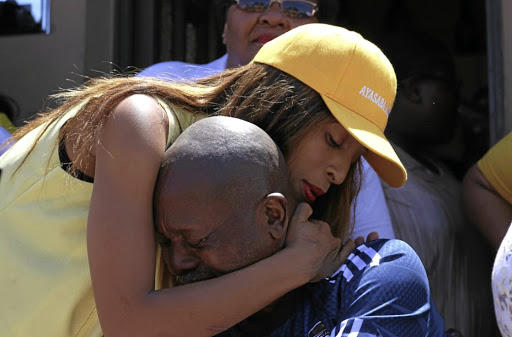 Maskandi singer Ndlovukazi hugs a tearful Sam Meyiwa, the father of murdered footballer Senzo Meyiwa, after she donated R6000's worth of groceries to the family in Umlazi, outside Durban.

Maskandi star Ndlovukazi has played the Good Samaritan to the destitute parents of the late Bafana Bafana and Orlando Pirates star Senzo Meyiwa.

Born Thandolwenkosi Mbatha, Ndlovukazi donated groceries to the Meyiwas, who have fallen on hard times since Meyiwa's father, Sam suffered a stroke.

Meyiwa Senior is now wheelchair-bound and speech impaired after suffering a stroke in August. Ndlovukazi brought tears to his eyes when she delivered groceries worth R6000.

She was welcomed in the area by fans, members of the ANC, ward councillor Thandiwe Zuma and the Umlazi, Durban, community at large.

In the pictures taken during the event, Meyiwa is seen sobbing. Ndlovukazi said she opted to help because she knew that there was no one employed in the family.

"I only realised when Bab Sam suffered a stroke that Senzo's death really affected him. It shows that he has been suffering, especially since the case is still unsolved.

"As a musician I felt the need to donate the groceries just to meet them half way. It is not much but I knew I had to help. They need all the support they can get."

In the R4m payout, the Meyiwas only got 50%, while the other 50% went to Pirates because it was the club that took the life policy over him.

Senzo's 50% was distributed among his kids. His customary wife Mandisa Mkhize, Sam Meyiwa, and Kelly Khumalo all did not have a legal stand to claim it.

Ndlovukazi who left her nursing profession to pursue a music career has promised to donate groceries every month until the end of the year.

"What was hurting was that when he saw the groceries, Bab Sam just broke down, because he couldn't speak. I knew it was tears of joy. Senzo's mother was excited too."

The star, who released her new album last month, has appealed to the businesses around Durban to assist the family.