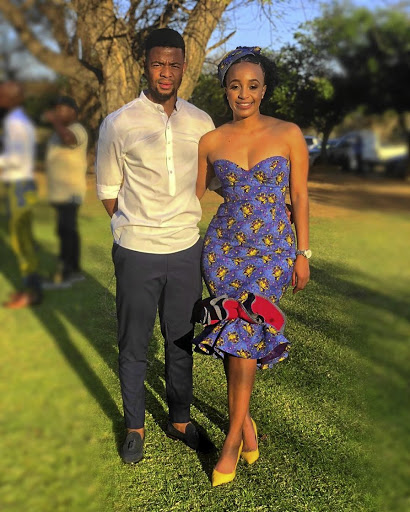 Following months of speculations, soccer star George Lebese has seemingly confirmed that he has reunited with former flame Sizakele Manonga.

Over the weekend, the couple made it official on Instagram when they stepped out to attend a wedding together and shared snapshots of their rekindled love.

In 2015, the couple was involved in a nasty break-up that unfolded in the public eye.

"If two hearts are meant to be together, no matter how long it takes, how far they go, how tough it seems, fate will bring them together," the Mamelodi Sundowns winger shared the lovey-dovey caption on Instagram.

Manonga also posted the same picture on her Instagram account with the caption: "I never knew how to worship until you taught me how to love."

In February 2015, Lebese found himself in hot water after he was arrested for allegedly assaulting Manonga and damaging her car.

The case was later in the year withdrawn by the prosecutor.

In 2016, Manonga found some comfort in the warm arms of former Kaizer Chiefs defender and business tycoon Jimmy Tau. Their short-lived romance ended with a failed engagement.

Lebese ignored our calls and WhatsApp text to comment.

Manonga could also not be reached for comment yesterday.

Jimmy Tau’s fiancée Sizakele Manonga has taken to social media to rubbish all those breakup rumours with one happy snapshot. Manonga shared a ...
News
5 years ago

They've been through the most and at one point decided to keep their relationship out of the public eye.
Lifestyle
3 years ago
Next Article