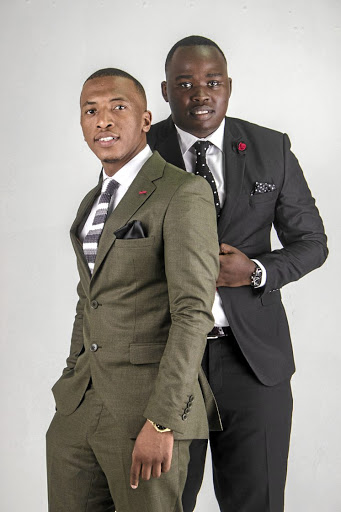 When two great gospel stars get together, wonderful things are bound to happen.

The project is a collaborative effort resulting in great sounds and a powerhouse of vocals.

The 15-track album is the culmination of years of experience in the music industry combined with sheer talent.

According to Mkokstad, who was born Mdumiseni Nzimande, the album had to come because the fans were calling for it.

"We did a song together and gospel fans loved it. They have been asking for this collaboration since then.

"From a business perspective, we thought a single wouldn't work, so we decided on a full collaboration album."

Zungu, who was born in Inanda outside Durban, says: "We are different brands but of the same calibre. We believe that, for us, collaborating will take both our careers to another level. It is not competition, it is about complementing each other."

The duo's album, that was released recently, has received a positive response both on radio and in terms of sales as it has achieved gold status after selling more than 20000 copies.

Zungu says that the album is different from their normal music style. To make sure the sound was unique, the duo used a different studio.

"We combined the two different flavours to produce something unique."

Written and produced by the pair, Ebeke Walunga uThixo speaks to those who have lost faith in the power of the mighty God.

Zungu explains: "We are saying whatever you are facing at the moment will pass. Whenever we go through a situation in life we tend to doubt his power.

"We are saying if you count your blessings, you will realise that God has been good to you. Don't give up now."

He says when they went to the studio they wanted an album that will accommodate all audiences - churchgoers and non-churchgoers. The music in the album speaks to people and soothes those wounded hearts.

"We knew we had to cater for a variety of fans. We wanted to inspire those who don't go to church but love gospel music. We wanted to encourage them through music."

Mkokstad, who was born in Mount Ayliff in the former Transkei, has 11 albums and numerous awards under his belt. The star, who has been singing since he was nine years old, has established his own recording company, Shammah Records and has signed Nathi Sithole.

He says he never thought that one day he would work with him.

Zungu released his debut album Enkazimulweni in 2007. In 2009, he dropped his second album titled Kuthe Bekwazi.

In 2011, he releasedKwanqab'umusa, which won the best album and best gospel song and best songwriter at the SABC Crown Gospel Awards 2012.

Zungu released Nginguthandiwe under his company, Thinah Music Productions, in 2013.