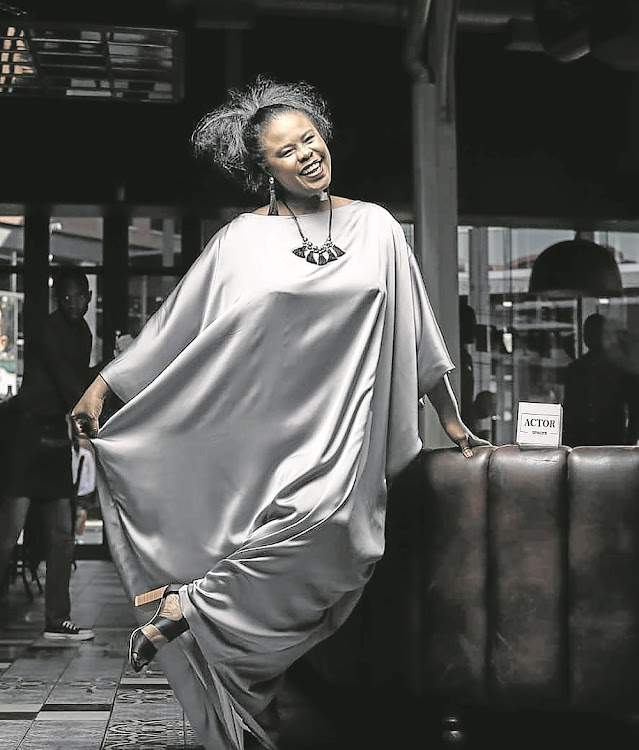 It has taken Nthati Moshesh five years to return to the theatre stage.

The revered goddess of acting is set to wow audiences in the role of minister of culture in Zakes Mda's You Fool How Can The Sky Fall at the Market Theatre from today.

The political satire, set in a fictional African country, about a dictator who has become paranoid of his cabinet and they are held in what seems to be a prison, is directed by James Ngcobo.

Her political woke-ness is heightened than ever before.

"The play has made me so much more aware of the politics. I now scrutinise and read newspapers with a different eye. I could be a politician, no I didn't say that," she jokes.

You Fool is as relevant as it was in 1995 when it was first staged at the Windybrow Theatre in Johannesburg. It has been performed many times and is an important reminder of how politics can lead a country to ruin when not handled well. We connect telephonically in between rehearsals and her lunch break.

Moshesh says in the newly created portfolio of minister of culture, she is relegated and disempowered, which she says is a comment on how culture is viewed and treated in SA. "Why is culture always at the back end when it's the backbone of every society? We don't revere culture in SA like they do elsewhere in the world.

"We struggle to find sponsorships and are fighting a battle for our royalties and intellectual property - this is how artists survive. We can live off royalties when we are not working and my son and family can enjoy them when I pass on. It's a serious issue," she says.

You Fool is about political leaders and accountability.

"We put people in power, and then what? Whose responsibility is it to hold them up to account? We, the people, must also carry the blame for their failings.

In the drama series Saints and Sinners Sdumo Mtshali plays a loving, over-trusting, innocent and gullible Ndumiso. This is one of the most difficult ...
Entertainment
4 years ago

"Today we have commissions of inquiries which I suppose are platforms to hold them accountable. Leaders have to work for the populace."

Moshesh relishes every chance she gets to dip into Mda's works. She has already acted in the two-hander The Girls In Their Sunday Dresses, directed by Thoko Ntshinga and she also directed Dead End in her final year at technikon.

"It's always a matter of time to do Mda's work. He's amazing and his works are delicious. He's a wordsmith and we have to honour his language, which is high-end English. I must say it has been a challenge for the artists as to how we honour the way he writes the English."

For maximum impact, I ask Moshesh if it wouldn't be a great idea to stage it in parliament. She laughs: "I would love that. We have cut the play to 90 minutes but it's actually a study. It could be ideal for political science students and matriculants who are leaders of tomorrow."

About her return to the Market, Moshesh says it will reinvigorate her.

"I haven't done theatre in five years. I was slightly despondent with TV, I wasn't feeling it. The landscape of TV has changed and social media has taken over. Our art has become about something else. Theatre reminds you that this is where it all started."

A decorated and much loved industry veteran with illustrious TV, film and theatre credits to her name shocks me when she says jobs are drying up.

"I hadn't worked for four months when the play came about. Prior to that I had gone for eight months without work. I'm 50 next year, and the roles are not coming fast and furious. I've realised that that which I love so much does not sustain me any longer. The show ends in October, then what?

"Remuneration has not improved either. I've had to turn down work because it's not what I'm used to. I face a conundrum of not taking work because it pays badly or go broke. I never wanted to direct or produce but I don't have the luxury to pick and choose. If I create my own work it can take up to five years to get off the ground."

She landed a small role in the upcoming Mzansi Magic drama The Housekeepers which starts next month.

Be that as it may, nothing can dim Moshesh's joy over You Fool. "I'm so nervous and excited. We have the responsibility to execute our roles that well. We are the custodians of bra Zakes's work."

You Fool How Can The Sky Fall runs at the Market Theatre from today until October 28 2018.