From soapies to Soufflés for Lucia Mthiyane 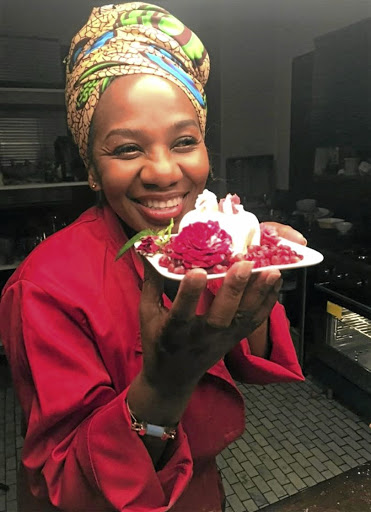 The self-taught culinary queen heeded the words of friends and started giving cooking classes, even though she didn't see herself as a chef yet.

"I've always cooked. I've always been known that I'm quite good in the kitchen. But I'd never looked at it like a career path that I could take in the future," she says.

Mthiyane has featured as a judge on two cooking reality TV shows, Top Chef South Africa in 2016 and KFC Taste Kitchen in 2017.

She might not have chosen it but the culinary life chose her, it seems.

The foodie who previously ruled the small screen as the memorable Rachel Phakati on popular soapie Rhythm City, has been named as a Nola ambassador for their #CreateAStir campaign.

She is representing the condiments brand at the Street Food Festival that is taking place until September 9 and making it the essential ingredient used in dishes. The campaign has seen chefs visiting radio stations to showcase their culinary magic.

"I'm very happy with the ambassadorship. It's a product that I'm used to, that I'm familiar with, that has always been in my cupboard anyway. So it was a natural relationship that fell into place perfectly," she says.

Mthiyane says her butter chicken and pork belly dishes that have to be prepared 24 hours earlier are a crowd pleaser.

In another lifetime talented singer, cabaret artist and actress, Lucia Mthiyane, was a school teacher. By day she would teach History and English, ...
News
13 years ago

Lucia worked for her role in Muvhango

LUCIA Mthiyane, teacher- turned-actress-and-singer, says she gave the performance of her life to get her new role in Muvhango. "People will probably ...
Entertainment
10 years ago

Actress Lucia Mthiyane tells us about her favourite nightspot SHE is a multi-talented superstar, actress, voice-over artist, singer and a budding ...
Good Life
10 years ago

She is predicting a food revolution in SA as people are becoming conscious about what they eat, seeking different flavours and learning about each other's cultural differences when it comes to food.

"People are very keen on what they put into their bodies. Before, people used to eat for the sake of eating, getting full and going to sleep. We want vibrant food; we're keen on other cultures and foreign ingredients like your okra."

Mthiyane says old favourites like amadumbe (taro) are being revamped and made into mash, something that was totally unheard of a few years ago.

With all of her success in the industry there have been some struggles. The culinary industry is still predominantly white.

Mthiyane mentions that there's still a struggle to get clients, especially corporates, to transact with black chefs.

Another challenge is getting support and stressing the culture of preparation to black customers.

Chef Lucia still offers her cooking classes, while she's also been working on a cookbook she can't wait to publish.

"I've been writing this cookbook for so long. I have written the preface. I have the chapters. I've got hundreds of recipes so all I need now is a golden thread to put it all together," she says.