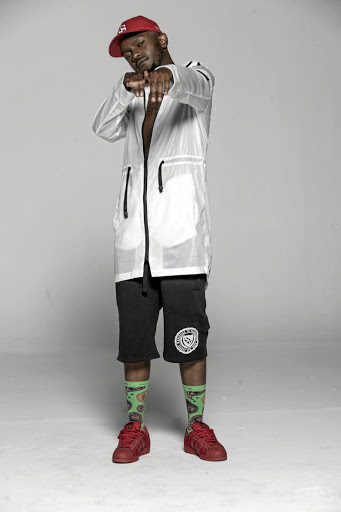 Senzo Vilakazi aka Kwetsa has come full circle in his career as a rapper which has made him one of the most prolific artists in Mzansi.
Image: Supplied

This is rapper Kwesta's world, we just happen to be living in it.

Real name Senzo Vilakazi, the 30-year-old rocks up at our newsroom, in Parktown, on a busy Wednesday afternoon 15 minutes ahead of his scheduled Time Out interview.

I'm unable to immediately attend to him as I'm in a meeting. But his team puts me at ease when they tell me via text that they don't mind waiting: "We are in the car chilling."

Not that it helps much. I'm in a panic with the thought of making one of the biggest stars of our generation wait.

But when I meet him, he's cool and laid back. He leans in for a bro hug and introduces himself as Senzo.

The multi-award-winning rapper has reached that peak in his career where he's a force of nature. He hasn't released new music in almost a year, yet remains the name on everyone's lips. He last dropped his smash hit Spirit with American rapper Wale in October.

"Not that I knew this would happen or Kwesta would be this big, but it was the point of all the sleepless nights or whatever it took to get here," he says.

In November, Spirit will compete at the DStv Mzansi Viewers' Choice Awards with other local hits such as Club Controller, Omunye, Inde, and Midnight Starring.

Later next month, Kwesta is planning to stage his most fulfilling period this year with his ambitious three-day music festival Spring Break.

Kwesta has promised that while his album might take a bit more time than we had hoped‚ he'll still be giving the people what they want - music.
Lifestyle
3 years ago

Taking place between September 28 to 30 at Germiston Lake, the festival will feature 60 artists ranging from AKA to Cassper Nyovest and Distruction Boyz. There will also be a surprise performance by an international artist. Kwesta is in the middle of choreographing a special set for the concert.

"I'm trying to start an Oppikoppi. It's not just about seeing your favourite artists; there is also a platform for upcoming artists too," he says.

"People can bring their business stalls to market and sell things. There are activities like mud wrestling and a gaming station. I want to give people an experience."

This year for Kwesta has been about touring the globe. He's hard at work on a follow-up to his highly successful 2016 album DaKar II. He promises that fans will get a first glimpse of his new material by the end of the year.

"You get to a place like America, nobody knows you. But it's inspirational. How I write my music is I don't want to write from a privileged place as Kwesta," he says.

"So, it's during those times that I can write from that point of view of being unknown. I find that I write better when I'm travelling, than when I'm here. It's more sincere and humble."

Kwesta and his missus' Umbondo

Rapper Kwesta and his missus Yolanda threw another celebration‚ taking them one step closer to their traditional wedding.
Pic of The Day
3 years ago

"You have this expectation that you create in your head when you are about to meet a world superstar," he says.

"But Wale was really down to earth. He was willing to learn and very excited to be here. That was eye-opening because I expected a diva and I got just a regular dude."

"I'm learning every day. I've been a dad for five years and it's never something you get to master. But it's fun. I'm trying to build a situation where I'm her friend," he says.

"I'm far from perfect. For example, yesterday I stayed in studio for too long. I got home at like, 5am. I couldn't take my kid to school. That's messed up. I make my wife angry. I'm working towards not being perfect, but somewhat OK."