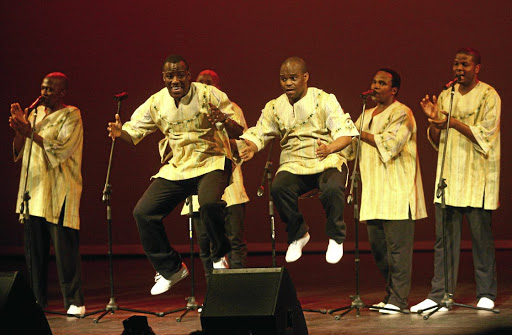 Award-winning group Ladysmith Black Mambazo will perform at the Moretele Park concert on Saturday before jetting off to Brazil.
Image: Veli Nhlapo

The Cothoza Music Awards seek to recognise and honour those who have contributed to the growth of the genre.

According to the group's manager, Xolani Majozi, it was the idea of the group's founder, Joseph Shabalala.

Majozi saidShabalala, who was forced into retirement due to ill-health, was excited the awards will finally happened in December.

"He always wished that iscathamiya music could have its own awards. He regards the launch as the best birthday present ever, since he turns 78 on Tuesday," Majozi said.

"The awards will be launched on September 7. We will host the awards with the help of the department of arts and culture."

Nkuna has a strong marketing background.
Entertainment
3 years ago

Majozi said the awards will also honour the late Solomon Linda, who wrote the famous Imbube, for his contribution to the genre.

"The aim of these awards is to promote the genre and make sure it is respected. Since iscathamiya is our signature music in South Africa, it is important to celebrate it," Majozi said.

The group recently returned from their 2018 world tour that started in Australia. They also toured Germany, the US, Norway and Finland.

They are next set to perform at the Moretele Park Tribute Concert that will be held in Moretele Park, Pretoria, on Saturday.

"We are looking forward to performing at home for our South African fans because we are usually out of the country. We often don't get a chance to perform at home," Majozi said.

He said the group always looked forward to performing at the Moretele Park festival, which celebrates 20 years, because of the unique crowd.

"The festival draws all kinds of people from all over South Africa and some from our neighbouring countries, so it is very special for us that we get to share our music with everybody."

Majozi said though the Grammy Awards don't come with a cash prize, they have earned the group world acclaim.

He said one benefit of winning international accolades was the respect they get in the music industry worldwide.

"These Grammies have changed our lives. The attention that comes with the awards has made agents and promoters want to book us. Thus you can make good money to change your family's life."

After the Tribute concert, the group will head to Brazil where they will perform for a week.

Majozi said the celebrated group was busy working on their new album that will be released soon.