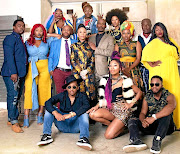 The famous 'Uzalo' cast members who might find themselves out in the cold due to SABC's financial troubles./Instagram

The country's most watched TV show, Uzalo, faces a bleak future, allegedly due to the SABC's financial situation.

Sources at Stained Glass TV, producers of the soapie, said the situation was so bad that they were thinking of stopping production or letting go of some of the staff members.

A string of WhatsApp texts that Sowetan has seen shows that the staff were concerned about losing their jobs.

There is also a letter seen by Sowetan that was sent to different producers and service providers by group executive for television, Nomsa Philiso, discussing the financial woes at SABC.

It stated in part: "The SABC is under pressure in the short to medium term in respect of cash flow due to the current liquidity challenge experienced. To this extent, we are sorry to inform you that the SABC has had no alternative but to defer the payments which are due on the 13th of July 2018."

While the SABC guarantee application is on the table in parliament, the public broadcaster is struggling to pay some service providers.

Sunday Times reported on Sunday that the public broadcaster was among the state entities whose financial distress was being looked at.

One of the filmmakers, who spoke on condition of anonymity, said the situation at the SABC was hitting small production companies hard. The filmmaker said when they don't have any work they were forced to fire staff.

SABC spokesperson Kaizer Kganyago said: "We respect our relationship with stakeholders and we don't engage on the contractual issues through the media. The letter that everyone is talking about was sent to only those who were expecting their payments at the end of July as promised. We have been paying our service providers."

Marang Setshwaelo of Dreamcatcher Multimedia, a company that does publicity for Uzalo, said through an e-mailed statement: "Thank you for your interest in Uzalo. As per our client/supplier policy, it is Stained Glass policy not to disclose details of commercial arrangements with clients.

"As such, we would direct you to the SABC official spokespeople should you require further detail on the current position."