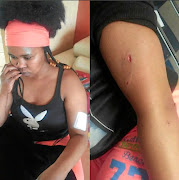 Award-winning songstress Zahara was ridiculed on social media on Saturday night after she posted that she had been attacked by beggars earlier in the week.

The Mgodi singer said she would be unable to attend the Nelson Mandela Concert in London this week to celebrate the Struggle stalwart's centenary.

"Tuesday night just as I drove by Spar in my area I reached out to give 'Job Seekers' some money instead they reached out grabbed my arm and stabbed me, tried to open my door, with the intent to cause more bodily harm," she posted on Twitter.

Zahara posted a picture of herself looking solemn with two wounds on her arm.

Tweeps were sceptical about the source of her injury and questioned if cancelling the UK trip was right.

Thami Lawrence Ngube (@TNgube) questioned the severity of her injury, posting: "So she cancelled a trip to the UK because of that nail cut?"

Miss_Mo (@Ntebo_Mo) posted: "Zahara cancelled a tour because of a little bandage. a dramatic queen."

Another Twitter user said Zahara's rural upbringing was to blame for the incident.

But some tweeps were sympathetic to the singer's plight.

Nozinga (@SiziweTobie) posted: "You did an act of kindness however it was not returned back to you. So sorry. But do not stop doing good. However be wise enough to know when to approach."

The songstress ended her social media tirade by asking what had happened to ubuntu in South Africa.

"It's very sad that one's humility and humanitarian beliefs are welcomed in this manner. BU PHELELEPHI UBUNTU?"

Sowetan was unable to reach Zahara or her management for comment at the time of going to print.

Zahara first came to the music scene in 2011 with her hit album, Loliwe, which garnered critical acclaim.

However, over the recent years there have been rumours that she has been suffering from alcoholism, a claim she has denied.