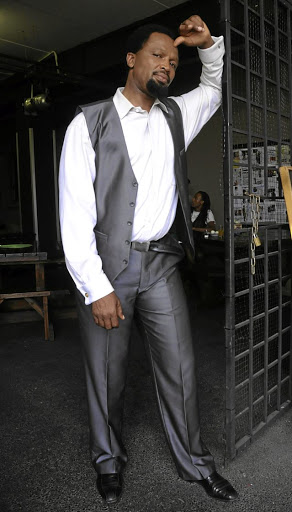 Shot in 2016 in Gauteng, Free State and North West, the thespian finally gets to portray a musician, Neo, something he has always wanted to do.

The film tells the story of a young woman, Ella (Jay Anstey), who goes on a journey to retrace her father's musical footsteps. After meeting her godfather, Neo, she heads to Johannesburg to bury her father's ashes at her childhood home.

Maake ka Ncube says the movie is a simple story about human struggles. He says he has been longing to play a role of a jazz musician for years.

The experienced actor came close to portraying one when he auditioned for Generations but ended up getting the role of Archie Moroka instead. He says he has always been fascinated by jazz musicians because of their grace and demeanour.

"When Lwazi told me about this role, I said bring it on. The beauty of being an actor is that you can be anyone you want. You see acting is a blessed profession because actors are liberators of the soul."

Sjava and Cassper Nyovest interpreted being African differently at the recent BET awards.
Opinion
3 years ago

The Queen star says that in the story, he pretends to play trumpet. This was because of a tight budget that did not allow him to explore the instrument.

"Honestly, I would have loved to learn, even if it was the basics of trumpet."

Mvusi, who has written for several sitcoms, says the film was a labour of love. She says Farewell Ella Bella was inspired by the South African landscapes she saw while on a road trip she had taken with her family. "It reflects my passion for telling South African stories, but with a focus on the female narrative, which is often sidelined in local and international cinema.

"But the heart of this film is built around the pursuit of happiness. It is a concept my father taught me to value above all else. Ella is a character steeped in misery. She blames those around her for it. But through the course of the film, she learns that only she can bring herself happiness, she must choose."

Farewell Ella Bella premiers at the Zanzibar International Film Festival that starts on Saturday. It has been nominated for a Golden Dhow award in the Long Feature Films category at the festival.